sealed with a high-five

Dan and I are two weeks in coaching a club volleyball team together. This is my sixth season coaching, Dan's first. Our team is delightfully wonderful, we have the minis - nine and ten year olds (can you believe how young they are starting volleyball these days!!!). They are little studs. 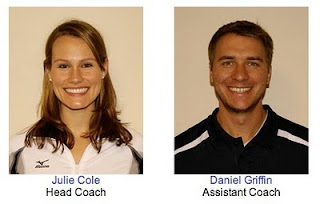 I love looking from off the court to see all twelve of them huddled around Dan, who is almost twice their height. He is so good with them! The best part is they don't know we are engaged (some of them suspect but aren't confident enough in their suspicions to accuse). At practice we are Coach Julie and Coach Dan and it's all business. In the beginning, it was surprisingly difficult to keep it platonic. Not that we can't keep our hands off each other for an hour and a half straight, it's just that we are accustomed to a certain amount of physical contact as the status quo, and we can't really hold hands etc. (or any kind of affection, even verbal) on the volleyball court.
We fixed this by creating the following code:

So if you ever watch us coach and see us exchange a high five, you'll know it's actually a PDA.
Our team will probably figure out that Dan and I are romantically involved when we have to miss a week of practice because we are on our honeymoon... so we should probably tell them ahead of time. A little later in the season we'll come up with a creative and cute way to tell them that we are getting married. Open to suggestions...