"The Holidays"
We listen to Christmas music. We put up lights and trees. We bake. We spend eleven hours shopping for great deals on Black Friday (or was that just me and Leslie?). We write letters and send cards to friends and family that we don't see or speak to very much during the rest of the year. We contribute to canned food drives, adopt-a-family, toys-for-tots, giving tree, and the like. We wrap gifts for our family and friends with love and meticulousness. We get together with family and friends more than any other time of year. We go to church - the only time every year for some of us. I think the month of December encompasses more spiritual reflection than any other month - Christian or not. There's just something in the air. Or maybe that's just my perception.

But on top of that, the giving and the reflection involved in Advent season, the "holidays" still seem to be a crazy and somewhat stressful time to most people. Too often the answer to "how are you?" during December is "too busy". Does it have to be that way? I actually caught myself saying -- so thoughtlessly -- "too many Christmas parties, not enough weekends in December" last weekend to a cashier at Whole Foods as we picked up wine and treats to take to multiple parties we had that night (which were both wonderful). Those words coming out of my own mouth immediately slammed on the breaks of my brain... guilt, embarrassment, re-evaluation... Where did that come from?

Perspective from a man in uniform
I had the pleasure of spending three days in North Carolina this past week, in Fayetteville which is very much a military town as it houses Fort Bragg, the largest Army base in the country. At the airport on Thursday, in my disgruntled-ness that the weather would delay my homecoming by almost 6 hours, I sat down in the only empty seat at the gate which was next to a young soldier in uniform who was headed home for Christmas to see his family in Idaho. We started chatting.

It would be the first time he saw his mom and dad in over two years, ten months of which was spent in Iraq where he had no contact with them at all.

His travels home that day included four flights -- all affected by the delays -- but his spirits were as high as they could be. Talk about perspective. I thanked him for his service and we went on our separate ways.

I later realized that Wednesday of this week was the last working day for most of the soldiers who do not have to stay on base in preparation for potential rapid deployment... which meant that Thursday a lot of them would get to go home for Christmas. This explained why the airports in Fayetteville, Charlotte and Phoenix were just full of soldiers going home for Christmas - it warmed my heart to see them all.

Together for Christmas
Being our first Christmas to be spent together (and three months until our wedding), emotions are gushing. Sorting through different traditions and talking about creating our own. Dan's first Christmas away from his family. Emotions. On top of this, Dan and I have been trying to peacefully find a place where we can worship together and both be nourished and fed and comfortable -- not an easy endeavor given our differing religious backgrounds (or anti-religious).

So this Sunday... right now... as I sit with my laptop on the couch in the waiting area of Francis and Sons Family Car Wash where they will hopefully get a coffee stain out of the back seat of Dan's car while he is at a four hour volleyball coaching seminar... before I head out to do some Christmas shopping and then return to my parents' house to take a Christmas Card picture and get ready for a Christmas party that we have tonight... I just wanted to share the lyrics to Oh Holy Night.

I had never paid attention to the lyrics of this song until recently I discovered how poetic and profound they are.

Oh Holy Night, the stars are brightly shining. It is the night of our dear Savior's birth.

Long lay the world in sin and error pining 'til He appeared and the soul felt its worth.
A thrill of hope, the weary world rejoices for yonder breaks a new and glorious morn.
Fall on your knees. Oh hear the angel voices. Oh night divine, oh night when Christ was born.

Merry Christmas to all from Tempe, Arizona. (You would think this would be an autumn photograph, but it's actually our neighborhood this week when the leaves finally changed and started falling!) 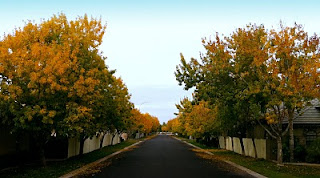 In other news... Dan and I are aggressively house-hunting -- wish us luck!
And on December 11th, Dan, with a handful of cousins and neighbors, successfully completed his first organized triathlon! So proud of them all! 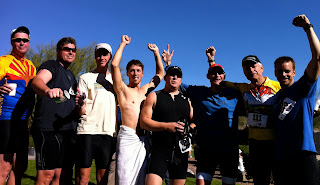