I am slightly embarrassed to admit that for the last nine and a half months, the thought of Dan's pre-wedding haircut caused me a great deal of anxiety. I mean, this is probably the most important haircut of his life. One bad haircut for a guy is not a big deal most of the time, 3-4 weeks and it's completely grown out. (And Dan has had a couple of bad haircuts since I've known him). But this haircut, if it was too short, or crooked, or too whatever... it would be forever preserved in our wedding pictures!

So, I've noticed that Dan has adopted a practice of increased tolerance for any neuroticism I might exhibit within a month of the wedding (I suspect based on the advice of a few married men). So he was very sweet and compliant when I asked him to get his hair cut this week, as opposed to any later (because you don't want your hair to look like you JUST got a haircut on the wedding day!), and this morning on the phone he told me he'd made his appointment for this evening asked me EXACTLY how I wanted it. I'm sure the flies on the wall were laughing hysterically at the word exchange. Anyway, I had so much anxiety about the whole thing that he lovingly just asked if I would like to come along... so I did. 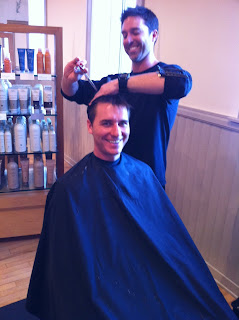 Turns out (as could have been suspected) I had nothing to worry about. Brett at Mood Swings in Tempe gave Dan a fabulous haircut, and was super understanding and cool about me being there, he even came and talked to me as Dan lay with a hot towel around his face, and told me exactly what he was going to do and how it would grow out for the next two weeks. I felt like I was talking to a doctor who was about to operate on my child, explaining to me how the procedure would go. Kudos to Brett for his patience and humor in the whole situation. Don't worry, I didn't supervise... I was doing things on my phone most of the time I was there... or whatever I need to say to make myself feel better about the whole thing after-the-fact... neurotic. I know.