I've got to vent.  One blog for complaining.  Just one I promise.

You know that feeling you get right before you are about to sneeze?  That sort of uncomfortable anticipatory hazy pressure behind your nose and eyes, which, if you're lucky, is immediately released when you actually do sneeze?  Well I have that feeling all the time now.  Nonstop.  With no end in sight.

This is what I get for posting my last blog about how this pregnancy is going to be as all-natural as possible and how don't like taking drugs.  Normally this time of year when all the pollen is blowing in and the weather is changing, I take Claritin D as-needed and it keeps my allergy symptoms under control.  I've never fully known the extent of my allergies because I've always just taken that antihistamine/decongestant at the first sign of allergens in the air.  This year I am getting a glimpse of what my life would be like if antihistamine/decongestants had never been developed.  And oh man am I miserable.  This weekend I started having allergy symptoms unlike anything I have ever experienced my whole life.  No joke yesterday I probably sneezed upward of two hundred times. I could handle the nose and eye stuff, but then it spread to my lungs and I've been wheezing and coughing up grossies since Sunday morning.  I literally can't think straight.  My eyes are so watery I can't see straight.  I cough and sneeze (and pee my pants) myself into uncontrolled frustration.  I almost broke a glass when I was trying to unload the dishwasher last night and a violent sneezing fit came on.  I can't sleep.  I've been through a whole box of Costco tissues in the last 12 hours a.k.a. the skin under and around my nose is completely destroyed.  I've got chills and itchies all over.

According to some, it is still safe to take loratadine and pseudophedrine during your second trimester of pregnancy, but many others say that there is no such thing as a "safe" drug to take when you are pregnant because anything you take, your baby (mine is <1% of my body weight right now) takes.  I'm not taking any chances especially since I know someone who took pseudophedrine during the latter half of her pregnancy and her breast milk never came in.  Supposedly Benadryl is "safe" for the baby throughout all nine months of pregnancy but Benadryl doesn't really do much for me besides knock me out (although I have taken it a few times when I've known I'm going to be in a cat house) and I'm still trying to not take drugs unless absolutely necessary.  So I suffer.

I saw my OBGYN yesterday (routine 22-week check up, everything/everyone looks good!) and he could see how sick and miserable I was... but what else could he say besides "call us if you get a fever, otherwise lots of fluids and rest"... it's not like there's anything he can do besides quarantine me to a room with no air particles. 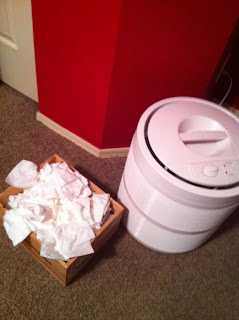 The humor in it is that the baby seems to think it's hilarious.  He/she has been the most active EVER today.  I like to think my munchkin knows I'm bummed out and wants to cheer me up.  Nothing is more delightful than feeling your baby have a party in your womb all day.  So I'm trying to focus on that!

Alright.  No more complaints after this.  Thanks for listening.