I feel like every month I marvel that she is even more amazing and incredible than ever before, but it's true.  I hope this never stops.  The wonder of being a grownup and watching her experience the world parallels her own wonder as she discovers so many new things.

Penelope now shows understanding of cause and effect and is starting to experiment with how adults react to her.  Examples: looking at me to see if I'm watching her as she grabs the remote control (which she's not supposed to have).  Babbling louder and louder still if all the grownups in the room are conversing with one another and haven't said anything to her in a minute or two.  Dropping her sippy cup onto the floor and then looking at me to pick it up.  Anticipating me dumping the water from the cup onto her head after I fill it up and say "now we're going to wash your hair, ready? one, two, three."

She very recently turns on the drama when something she wants is taken away from her, and she complains with whines of aaaaaaah during diaper changes -- if you didn't know her you might think she was in agonizing pain.  Typically a pig sound or a loud "boo!" will get her to giggle instead.

Sleeping has been a bit rough.  I keep saying I think she must be getting another tooth, but none have surfaced.  In fact, some new forms of all-around fussing have caused me to second guess my own intuition about her needs, but I suppose her needs are just getting more complex as she is far past the newborn hungry/tired cycle.  Is it classic separation anxiety or is it teething? Is she manipulating me? Or does her tummy hurt? The older she grows the less confidence I have that I've got a handle on responding in just the right way.  But I guess I'm doing alright.  I do wish she would stop the nap boycott.

She can crawl really fast.  She also scales the dogs if they are in her way, they just lie there and take the abuse as her heals and wrists dig into their ribs and spine and ears.  They are the best. The dogs are also good for climbing onto furniture or reaching the remote control off the couch.  Penny still relies on holding onto things for standing.  I am ok with this.

She weighs 16 pounds 10 ounces and she's still able to wear some of her 6-month onesies, but any pants or footed pajamas size 9-months and smaller are too short for her long legs and giant feet.  I've put away most of her long-sleeve stuff and I'm delighted to get her into some of the summery outfits that have been hanging in the closet for almost a year.  I dread the thought of her ever rubbing sunscreen in her eyes. I need to be more consistent about making her wear hats often even if we aren't outside, because currently when I put one on her head, she immediately wants it off.

She now has little interest in purées, other than as a side dish to her main course of textures and pieces.  Penny eats almost everything now, torn into small bites that she grasps into her palm then sloppily unloads into her mouth.  She looks like a monkey when she eats.  She has no tolerance for plates [we'll work on that one later].  She loves chicken and guacamole and smashed blueberries.  Chipotle is our favorite restaurant to go just the three of us.  I still prefer to strip her down to a diaper and let her play with her food and make a mess of herself but we don't do this in public.

She absolutely loves taking showers and baths (though she mostly gets showers).  I can put her on the floor of our big shower now and let her sit and play with bottles and cups, a convenience I have been looking forward to for months.  I need to sign her up for swimming lessons, like stat.  I expect she is going to be fearless in the water. 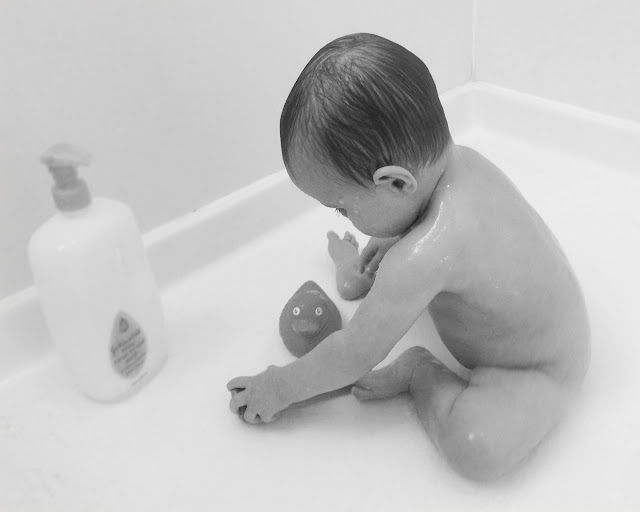 This month she had her first overnight sleepover at the Lang Gang house.  We didn't plan for this night to be anything beyond a late night of babysitting, or I might have talked myself out of it emotionally.  I'm kind of glad it happened the way it did because it wasn't as big of a deal as I would have made it out to be if we had planned the "sleepover" part.  Although, when I woke up that morning and she wasn't in my house, I frenzied to get to her as fast as I could, I missed her so much.

Penny loves to cuddle.  I love this.  Sometimes when she's playing by herself, she will crawl over just to lay her head on me for a second before going back to her business.

With two months to go, thinking about planning a first birthday party excites me and exhausts me.  Is my little girl really going to be one soon?

This month our Penelope Jane learned how to do this: 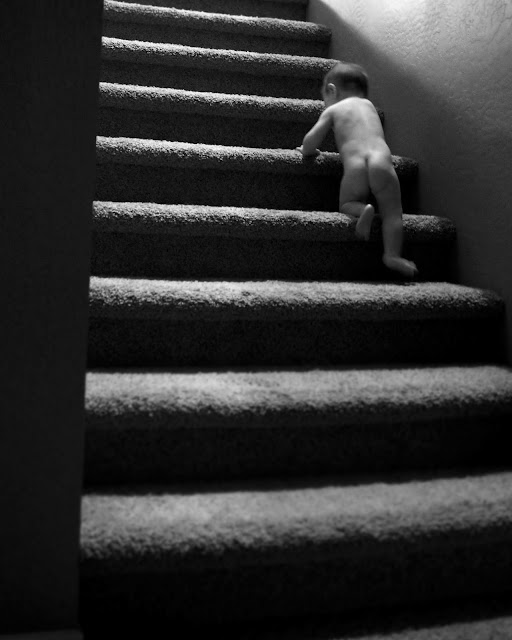