Yesterday afternoon, I shared the waiting room at my gynecologist's office with a beaming young dad holding his new baby, while mom was presumably in for a checkup.

"Six weeks," he said with a smile.

"He's so sweet." I focused on his meticulous tiny fingers and delighted in his infant grunts.  "My little girl is turning one on Sunday," I volunteered.

My little girl.  It just came out.

"Oh wow, I bet it's flown by," young dad responded.

I raised my eyebrows and shook my head 'yes'.  He has no idea.

"My little girl"?? What happened to "my baby"? My baby is turning one on Sunday.

As I gazed longingly at little stranger six-week-old, it became more and more real that my baby ain't no baby anymore.  My Freudian slip was from my brain. She is a little girl.

My little girl has hair in the back of her head just long enough to crease at her neck.  She can give hugs and sometimes kisses and she reads books all by herself.

My little girl is capable if clearing out her grandma's entire tupperware cabinet in about two minutes.

My little girl spent last Friday and Saturday at the beach, wearing a big hat, digging in the sand, splashing salt water, pointing at seagulls. She played so hard that she crashed out and took a two-hour nap under Nana and Papa's giant beach umbrella.  Passing out after playing too hard... that's a toddler thing.  A little girl thing.

My baby girl, my daughter, is a kid.

Then stranger mom came out to join her family so they could hit the road.  She had a familiar tired glow to her face, and the same belly pouch that I have yet to shed.  Her six-week appointment had gone well. Everything was going well. They were exhausted and elated at the same time.

"Well, congratulations. You guys have so much to look forward to." I offered with utmost sincerity.

Off they went.  And on I went, in the door to the back for my own full-system check, one year later.

So much to look forward to. 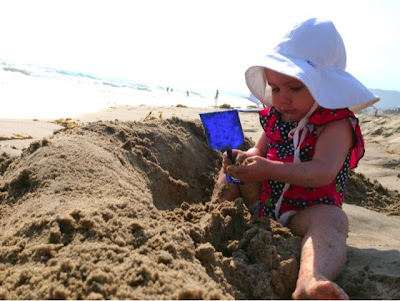 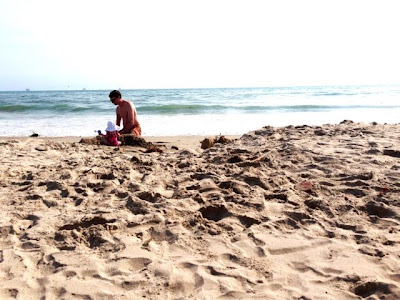 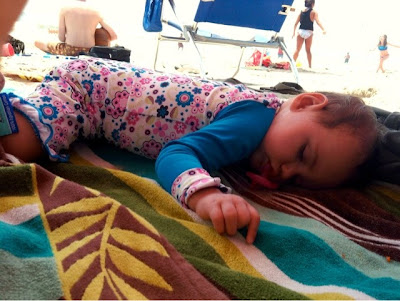 Photos from our first family trip to Carpinteria State Beach,
a sacred destination of all the ages in Daniel's family,
and home of many memories indeed.