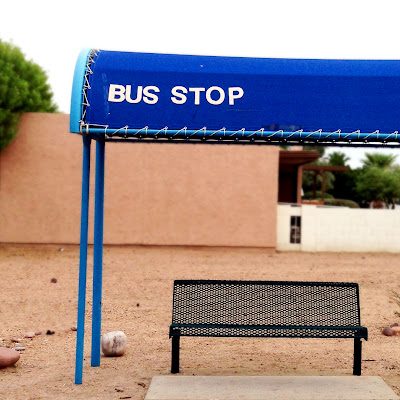 I've done quite a bit of traveling to the east coast in my professional life, and I've always especially loved taking the Metro in Washington, D.C.  There's something kind of awesome about being in transit with hundreds of strangers.  The people watching. The relaxing.  The not having to pay attention to the road or the route.  The multitasking.  The crowd of people all unrelated to one another but with a common goal, with somewhere to be.  The rumble.


We don't have a vast public transit culture here in the Valley of the Sun.  We have a new-ish lightrail that's probably convenient for people who live at one end or the other, but doesn't cover enough ground to help most Phoenix-area residents.  And we do have a bus system, but there's a general stigma attached to using it.  That's what brings me here today.

Do you know anyone who rides the bus?  I do.  My dad surprised us all when he started riding the bus to work on a semi-regular basis last year (long before he retired).  A top executive with his own parking space, riding his bike to and from the bus stop.

"Just doing my part," he would say.

Now four months after retirement and patiently recovering from last week's shoulder surgery, the pops can't use one arm for six weeks (thus can't drive).  My mom takes him most places, but he's an independent guy... so what does he do? He takes the bus, like a boss.

Those of you who know my dad might think this is pure platinum-covered awesome.  Those who have lived in places where public transportation is more common might not think it that big of a deal that a regular successful guy would take the bus. But in my world over here, it has really made me think.   And it's made me notice how many bus stops there are... I never realized it but there is a bus stop pretty much every half mile on every street I frequent Tempe and Scottsdale (my route to my folks' and to work).

Truth be told, my only experience with the bus system in Phoenix has been avoiding them like the plague during rush hour, or clenching my knuckles at them when I'm stuck behind one in the right-hand lane stopping all the time and never turning right.

Truth be told, I've always been a snob about city busses and anyone who would ever want to ride them.

What I rarely do is look inside the windows to see the people actually inside.  Not just people who take the bus because they might have no other option for getting from A to B, but folks who choose to take the bus for whatever reason, like my dad.

If someone needs to get somewhere... why shouldn't they take the bus?

Examining what we really need, the solutions and options we have, and making choices without pride or prejudice.  That's what it's made me think about.  What other areas of my life am I a snob for no reason? Are there other things I have unfair preconceived notions about?  How might I get past these things and maybe save some money and maybe have new experiences I wouldn't have otherwise.

I would like for my children to know what public transportation is like.  Maybe some day that can be a special thing she does with her Grandpa.

Or maybe I'll go with.