Atrocity in Philadelphia and My Aching Heart

Right now there is a murder trial happening in Philadelphia.  A pretty big one; one guy, eight counts of murder.  Haven't heard about it?  It's not your fault, it hasn't gotten a lot of front page attention since the trial began almost a month ago.  But it's starting to trend.

Kermit Gosnell is on trial for first and third degree murder, illegal prescribing of drugs and related offenses. He might even get the death penalty.  The wikipedia article about him is currently flagged 'This article has been nominated to be checked for its neutrality'  but... you have a computer... you can do some research if you want to take the time.  The man ran an abortion clinic for just short of 40 years in Philadelphia, and according to the testimonies of some of his former staff members and clients... some really really terrible stuff happened there.  He wasn't certified to be doing surgery and apparently the clinic was unsanitary and did not comply with codes and standards. A handful of women came forward also stating that they did not receive adequate care, and one even died (maybe more?). Testimonies indicate that on more than one occasion, women were forced to have the abortion once they got in there, even after they expressed that they had changed their minds.  Hundreds of victims of late-term abortion [read: babies] were accidentally born alive at this clinic, only to have their spinal chords cut, essentially a beheading, or to undergo other methods of being killed.  It's gut-wrenchingly painful to even fathom.

I think we can all agree that anyone anywhere doing what he did must be stopped and held accountable for their actions, Yes?

I have spent a lot of time in my life considering both sides of the abortion debate.  Never once when considering science or logic have I concluded that human Life begins any later than the moment of conception.  [If it was later, that would mean abortion didn't actually "take a life" until whatever that later moment was. ]  But it wasn't until I had Life in my own womb for the first time that this fact completely blew my mind.  Just a week after I missed a period, there it was. A Heart. Beating.  I could hear it and see it.  It wasn't my heart, it was someone else's heart. In me. Someone Else. Tiny, yet undeniably: Another being.

I have known a handful of women who were pro-abortion at the time when I spoke with them about it, who have since given birth to their first child or are currently pregnant.  I do wonder if seeing and feeling their own child develop in their womb changed their opinion on the issue.   Always, but especially after becoming a mother, when I read about things like Kermit Gosnell's trial, or mandatory abortions in other countries, or even/especially just one woman's testimony about how she regrets her abortion... my heart aches in a way that it doesn't ache about anything else in the world.

To me, the real atrocity is the notion in our culture that purposefully taking the life of a developing child in the womb is completely acceptable, provided that the baby is killed before it is removed from the mother's body, and provided that the mother's health care needs are met according to legal standards.  This notion allows for the same exact things that happened at Gosnell's facility to happen every day, by the millions, and not be a big deal simply because the facilities are cleaner and the babies' body parts are smaller and less developed, and are disposed of properly.

The National Abortion Federation disclaimed Gosnell saying that they had denied him membership because his facility did not meet appropriate standards.  Planned Parenthood condemned him saying they would condemn any physician that does not follow the law or endangers any woman's health.

To them, the only tragedy is that some women can only afford to go to places like Gosnell's to terminate their pregnancies, instead of theirs or other legally compliant facilities. True... poverty is a tragedy indeed.. but what about the kids?  Their right to draw a breath of air and declare their humanity with their own voice?

I stirred and stirred about whether or not to write this post.  No one wants to read this stuff.  If I were writing about a puppy mill where puppies were being killed, readers would probably be commenting asking how they could help the innocent puppies, adopt one, send money, etc.  But no, not this, it's too... fill-in-the-blank.  It's just too much.  Most people probably haven't made it this far in reading my long post.  But as media coverage of the Gosnell trial is [finally] amping up, it's been heavy on my mind and I had to write it.  My heart was aching too much to keep it in.

If you dare browse the internet to read the details upon details of the Gosnell Murder Trial and any of it bothers you; or if anything else I've included in this post bothers you... would you ask yourself Why?  Really why?  And do you think this is something worth talking about?

I leave you with a quote from Pope John Paul II's Christifideles Laici #38 in 1988.  The more I have pondered this quote word by word, the more it all makes sense.

"The common outcry, which is justly made on behalf of human rights -- for example -- the right to health, to home, to work, to family, to culture -- is false and illusory if the right to life, the most basic and fundamental right and the condition for all other personal rights, is not defended with maximum determination."

I am so proud of my little volleyball team.  These girls are nine- and ten-years-old, competing against mostly twelve-year-olds and they have been exceeding my expectations since the beginning of the season last November.  But today they is the first time in my coaching history with this age group where my kids have gone undefeated at a tournament.  Winning feels great, but not as great as it felt observing my players taking what I've taught them at practice with them onto the court in a real match! And working harder than they've ever worked!  They did so great!  Gahhhh I am beaming with pride!! 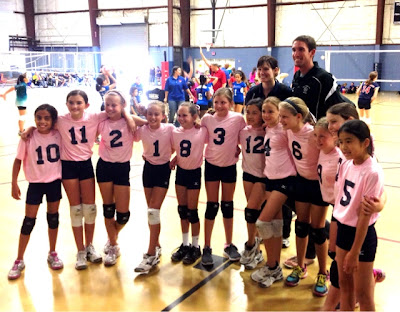