I've been so very blessed to have a relatively easy time with breastfeeding -- a good latch from the start, only four clogged ducts in ten months, no infections or thrush, no diet restrictions and no major issues with milk production.


I've also been determined.  I think breastfeeding for the long haul is half luck and half attitude.  Attitude that says... I'm doing this.

Nursing changes as baby changes. You can read my first post about breastfeeding here.  I wrote those words nine long months ago, not knowing the adventures Penny and my boobs would have throughout this ride called Baby's First Year.  Oh how time flies. 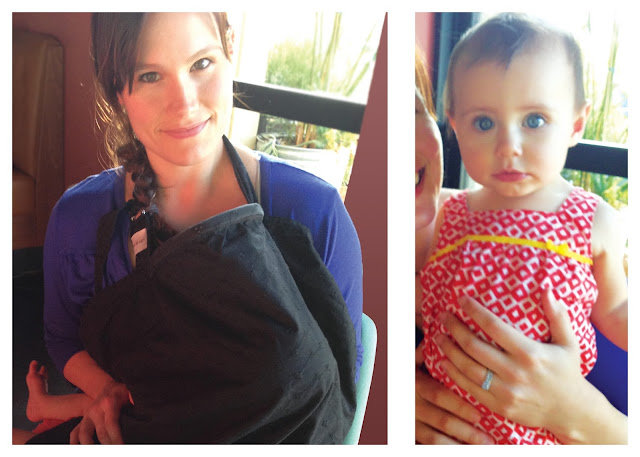 Here are a few things I have to say about breastfeeding older babies:

They eat way faster.  Penny can polish off a full meal now in about five minutes.  Both sides. No more planting my butt on the couch for a full episode of The Office for each boob.

They really let you know when they want it.   Penny's moves: the collarbone nuzzle, the sideways head plunge, the shirt shake, the sniff'n'kickyourlegs.  It can be obnoxious in the wrong place at the wrong time, but overall is an endearing reminder that your baby needs you.

They eat in all sorts of positions.  Sitting next to you, sitting on your lap, standing on your lap, kicking a leg and waving an arm, upside down on the bed... As long as they can reach it, they're good.  I can nurse Penny standing up, sitting or laying down, in the bath or shower, walking around, in the car, in the wilderness... you name it.

They bite.  Yes, it's as painful as it sounds.  Some moms recommend screaming or flicking baby's cheek when they bite, to startle them.  I haven't had luck with this... I suppose my pain tolerance has just amped up a little with motherhood.  This doesn't have to be a deal breaker... but as I've said before, breastfeeding is not for sissies.

They fight the cover.   If I use the cover when I nurse in public, I go into the feeding well knowing it's a gamble... one sly move of her arm and somebody's gonna get a glimpse.  I've mastered a few brilliant no-cover techniques that allow me to nurse in public discreetly and tastefully without a cover... like the face-the-other-way technique, and the only-pull-your-nipple-out technique... brilliant, right?  In public without a cover might not be for everyone.  I suggest making the nursing cover a regular prop during feeding time at home if you expect your baby to tolerate it in when you are out and about.

You're pretty much hungry.  Pretty much all the time.  Ditching 500 calories a day without exercising? Yes please. Too bad that just means your appetite is insatiable.  But remember, you're making food. In your boobs. You're a machine and you need fuel.   And never underestimate the importance of drinking tons of water.

The bonding continues.   I  treasure the quiet time Penny and I have in the mornings when she first wakes up and snuggles into our bed to nurse and go back to sleep for a little while.  And I love that no matter what she was doing right before, her busy bright eyes soften into a drunken peacefulness and her whole body melts into me after a few seconds.  She needs her mama.  Nothing compares to nursing your baby, regardless of her age.

People will imply you should stop. The older your baby gets, the more people start to ask questions. Try not to get defensive, or let them get in your head.

That brings me to my next point.


I have met so many situations that have assured me that our culture is coming back around about breastfeeding.  I've never had a fitting room attendant look at me strangely when I ask if I can use one of the rooms to nurse my baby.  I've never been asked to move or leave or --gasp-- feed Penny in the bathroom when I've nursed her in restaurants. And I've only been ogled at awkwardly a few times when nursing in the out-and-about, mostly by teenagers who can't help it and probably don't know better.

But every now and then someone says something discouraging to me.  There are still folks out there who perceive breastfeeding to be too inconvenient for any free-thinking mother to want to do it, or gross, or something only weird people do, or something that's 'good when they're newborns' but you have to stop at [fill in the age] so it doesn't screw up your kid.

"How long do you have to keep doing that? I thought you were supposed to stop after six months,"  a coworker said to me recently.

What she meant was... "breastfeeding a baby that old is weird, when are you going to stop already?"

I responded, "I get to do it until she is ready to be done." [with a smile, of course]

Breastfeeding is important to me and has become just a normal part of my motherhood.  There are days when I'm at work and I really don't feel like pumping... but I do it.  I have had a couple of dips in my production where I could have just gradually let myself dry up... but I pumped extra and drank a boat ton (yes I said boat ton) of water and I got it back up. There have been days where I wanted to wear something that would have prevented me from nursing in public... something really cute... but I wore something else because I knew my baby was going to need to eat where we were going.  There was the day when Penny bit me so hard both nipples bled (she couldn't help it, her teeth were brand new and she didn't know what they were capable of)... but I pressed on [and cried... a lot].

This breastfeeding thing can be a little nuts, but I'm not crazy for doing it.

Be Nice to Us.

It's important to me.  I'm doing this.

But up there where I said it's half attitude and half luck?  There are moms who have had bad luck with breastfeeding.  Every mom and every baby are different.  For some, it just doesn't work for them, they don't produce enough, their baby doesn't latch, their baby has food sensitivities... there are all kinds of good reasons that women don't or can't breastfeed.  And they are great moms.  And formula is good for babies.

It saddens me that there are stereotypes out there about us moms regardless of what our babies drink.  Breastfeeding your babies until they are "old" doesn't mean you're weird.  Not all long haul breastfeeders are going to keep nursing 'til our kids are off to kindergarten! (darn you Time Magazine).   And giving your baby formula doesn't mean you're any less of a mom, or didn't try hard enough, or are any better or worse than any of us.  There is no universal right time to wean your baby.  Every family is different.

Mommas: Let's remember the jubilation and security we can feel in being in community with other mothers, and show the world how encouraging and supportive we can be to one another, regardless of what our babies are eating!


You might also like:
The Universal Underground Sharing and Caring Movement
Expressing Myself, And Other Lactational Matters