On Disappointing Things and Being a Grown Up

This morning I spent an hour preparing/cooking a meal for my family to eat for dinner tonight. A crock pot meal just like I made last night, this time with enough that I would be able to freeze some leftovers. Today was sweet potato and honey ginger chicken and I worked very hard making it.  I experimented. I had fun with the process.  I was proud of it. I was excited to smell it cooking and later share it with my husband.

Those who know me well know that this is not something I do often, cook. And two days in a row touching raw chicken is like a world record.  So grown up of me.

After my preparations, I clasped my hands and rolled them with a grin on my face, then I took the crock pot to our garage (so the slow cooker doesn't heat up our whole house), to the same place as yesterday.  I plugged it in and turned it on, just like yesterday.

I cleaned the kitchen.

Penny napped a long while, I stretched and iced my back and hung out with my nephews that had come from across the park to visit, then we had baby play group.  It was a good day.

Later I went to go stir my masterpiece for the first time and discovered.... a cold pot.

The power strip was off.

The meal I worked so hard to make had been sitting there, in the garage, growing bacteria for three and a half hours.

Unbeknownst to me, Dan turned that power strip off last night when he was doing some things in the garage.

I had to go for a drive I was so devastated. So mad at Dan for flipping off a switch that we have always left on, and without telling me -- didn't he know I was going to use it again and wouldn't think to check?? So mad at myself for not thinking to make sure the power strip was on -- why didn't I check?? What an idiot!  So mad at my breast-feeding hormones for making me so scatterbrained and forgetful all the time.  So mad at the distractions that put me in a hurry to go plug it in and move on to the next thing.  So mad at the crockpot for not having a light feature to let its user know that yes, it's turned on -- what kind of heated cooking device doesn't have a indication feature in place to let you know if it's on or off? (We're totally buying a new crock pot that has that feature, BTW).

I was tempted to just cook it and pretend it never happened, but ultimately logic and good reasoning told me it wasn't worth the risk. This meal was not to be.

Emptying that crock pot into a trash bag was one of the most disappointing things I've ever done.   It still smelled of fresh ginger and honey and brown sugar.  It would have been so delicious.

During my drive around town to collect my thoughts and avoid my toddler observing my adult tantrum, I came to understand that this was not anyone's fault (though arguably my own), it was just a quite unfortunate honest accident.  These can be the worst.  It's so much easier to blame others for our bummers.

I'm still bummed out and I'm not cooking tonight.  But I'm not blaming anyone and I'm not angry anymore.  And I think arriving at that place could be more grown up than touching raw chicken. 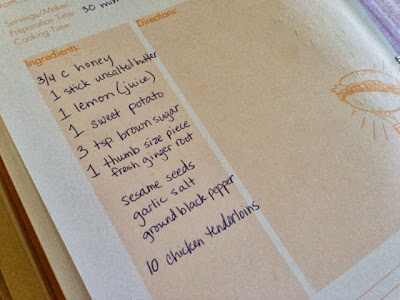