I have no clue how big she is (height and weight) but Penny has outgrown a few of her 12-mo sized outfits and is wearing mostly 12-18 month clothing.  Her little yellow Crocs (can't miss 'em in photos!) are starting to get a little bit tight, which makes me sad because that is the first pair of shoes I would say that she really got good use out of.  She's also been wearing her first pair of Toms, which are a size 4.  We really had a breakthrough with the whole shoe-wearing thing this month.  Can I get an amen.

It has been a couple months of firsts since my last Months-Old post, mostly involving mobility.  As you've probably heard, she's walking like a champ.  We had first steps, then as of 13-months her record was 10 wobbly steps in-a-row, and a couple weeks later she had become a full-time walker.  She also went down (and up) a slide for the very first time at the playground, and had her first rides on the swings.  Now that the weather is [sort of] nicer, we've been getting outside to play and explore a lot more.  She loves being outside and just today she actually went to her shoes and attempted to put them on herself, which tells me she wanted to go to the park because we always wear shoes (and a hat) to the park.  Adorable.

After months of experimenting with it, she learned drink out of a straw for the first time and during a couple weeks of regular juicing, she showed us that she loves fresh squeezed fruits and vegetables.  She can now take bites of things like my sandwich or an apple, without it being cut up for her -- this is a blessing (less cutting and chopping) and a curse (more in the mouth = choking hazard).

We've had a rough go with physical ailments these last couple months.  Penny was very sick with croup the week Dan was out of town, then I got sick.   Now we're all technically healthy but with autumn changes have come fall allergies, which have made both of us a little sneezy.  I pray her allergies are not like mine.  Also, my back went a little crazy and I am still recovering and rehabbing.  This back stuff has affected my day to day mothering skills in so many ways, especially the first week when I couldn't even pick her up.  Also in the physical ailment category, Penny had her first skinned knees and bruised elbows from playing outside, and her first (and hopefully last?) tumble down the stairs and first black-eyes from the coffee table.  Not my proudest motherhood moments.

One blessing (hashtag silver lining) of my back injury is that Penny has spent more time than usual at home during the day, resulting in our ability to have a little bit more routine in our life.  Very recently, she has actually become predictable in the nap department.  Ahhhh, it's so nice.  If she wakes up between 7:30am and 8:30am in the morning, I can count on her to crash out precisely 2.5 hours from her morning wakeup time, and then nap 2.5 or 3 hours.  If she sleeps in until 9am or later (yes, sometimes she sleeps super late!) I can count on her to be awake for 3-4 hours before crashing out for one solitary nap of the day.  So it's not exactly a perfect routine, but at least it's a start!  I think we are in that transitional phase between one and two naps a day, I guess they do that around this age.

We made the switch to the convertible car seat (soon after 12 months) and I soooo miss the infant bucket and it's portability from car to car (to stroller to house to grandma's car to wherever)... but we're adjusting.   She outgrew the bucket by length, not weight, our long little noodle.

She's saying words and phrases with meaning now, such as "uh oh" and "book" and "hat."   I think I got an "oh boy!" one time but I can't validate it.   Daaaaa-deee either means Daddy or Doggy, whoever is closer.  She sometimes now says "mumu" for me, but only when she either wants to nurse or is in distress, and never with the same enthusiasm as when she calls for her dad or her canines.  She's chattering a lot more, and sometimes she whispers to herself and she is going about her day.  I wish I knew what she was saying.   Oh, also, first use of sign language and waving (which I already shared here).

First temper tantrum(s).  Question: how do you not laugh when your toddler is throwing a temper tantrum?  It is hilarious... something small disappoints her and all of a sudden she lowers herself to the floor and lays her ear to the ground and whimpers, out of nowhere, as though it's an earthquake drill and I didn't hear the siren.  She's had a few full-on-scream-fest-snot-nosed-blotchy-faced-didn't-get-my-way tantrums, but she mostly does the whimper-for-a-minute kind.

She observes things that grownups do and has started putting my iPhone up to her ear and walking around the house like she's talking on it.  She also uses her mini loofah to pretend wash herself in the shower, and her hairbrush to pretend brush her hair, among other things.  I love all these signs of learning.  Dan taught her how to write with a pen on paper (oh boy).

She's developed a cheesy grin that she uses to make people laugh.  She also shakes her head back and forth quickly to demonstrate that she's "got the chills," of course waiting for a positive response from whoever is watching.

She still likes to cuddle, but not as often as she used to.  The moments of Penny snuggles are so precious and fleeting, I cherish them dearly.  Sometimes I try to hold on a little longer than she wants, and she uses force to push away from me.  I'm not ready for her to be pushing me away, but I suppose it's something I'm going to have to accept in so many ways over the years.

She also uses force to squirm away from diaper changes... it's bad.  In a few years ask me about the time she dipped her rice cake in her own poop during a struggle (don't worry, she didn't eat it).

I didn't feel like I had a toddler until this week.  I knew she was a toddler, technically, but she still felt like a baby to me until I observed one day as she ran to her ball pit, belly flopped into it, and then looked at me to see if I thought it was funny.   Toddler indeed.  What a joy. 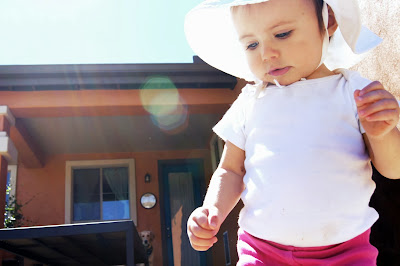 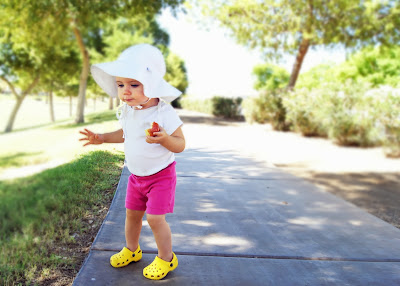