Dan and I both come from big extended families. 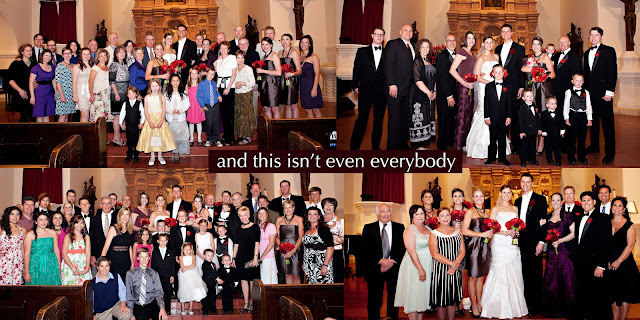 So big that we couldn't fit everyone into four photos at our wedding.  So big that we have to have two "Thanksgivings" and three "Christmases"+ and the emails and phone calls reserving dates and starting to plan these multiple events started in September.  This makes for a lot of different outfits (can't be wearing the same thing in all the photos), and a lot of driving around, a lot of coordination, sometimes allergy medicine, and years worth of protocol about gift-giving that one could only understand if they've been a part of the whole thing for a while.

You can see why my goal in life is to never host Thanksgiving... also the fact that I don't want to touch a whole dead turkey... and I just might get away with it because there are plenty of people to volunteer ahead of me.  I'll stick with making cranberries (recipe).  I digress.

We are so intensely lucky that for the most part, both our families' hubs are right here in the Phoenix area.  Dan and I have a sort-of good system in place, alternating "big" celebrations between his big family and mine, year-by-year between Thanksgiving and Christmas, with options for wiggle room to include more-intimate gatherings with our immediate families.  This has been totally doable, for the most part, so far.  I know having older and more children may change things.

We've always said we will stick to the plan as much as possible but that ultimately we are going to do what works best for the Team Griffin family unit, any given holiday.  Some years this might mean missing out on something one of us has participated in every year our whole life.  I think back to my first Thanksgiving away from my parents and sister, and how hard that was for me.  It was the first year we were married and Dan's family still lived in California so we went out there to spend it with them.  This was the year I learned that not everybody makes yams the same way my mom does (I thought there was only one recipe for yams), and not everybody includes a chocolate option among the apple and pumpkin pies.  [I got over it.]

That was also the week we made a baby and didn't know it (what, you could have done the math).  Now that baby is a toddler and the complications present themselves in new ways like nap times and houses that aren't quite toddler-proof and carseat temper tantrums.  And so it goes, the glory of spending holidays with the people you love.  But glorious it is, all these complications are a blessing.

I repeat: All these complications are a blessing.

This month when everyone is being extra-exclamatory about their gratitude, I want my first published proclamation of my own November Thankfulness to be about my big awesome family.  And when I say my family I mean my husband's side too, because the day these photos were taken, all those folks on his side became my family too.  I love all of you and I wouldn't trade being a part of a doubly huge family for anything.