Coming up on a big milestone birthday, I wanted to preserve and share a snippet from each year of my life so far.

Two:  What I would say to be my very first true memory:  I woke up in the middle of the night.  My well-intentioned parents were in a let-her-cry-it-out phase, therefore did not respond to my beckoning.  I patiently called for them to come to my room.  They did not.  I stood up on the bed and called louder.  Nothing.  I screamed and screamed until my face was so swollen that my eyes burned.  Nope.  How dare they not grant my wishes. My throat quivered with anger with every noise that came out of it.  I went hoarse.  My parents finally came after two hours (ok probably ten minutes) to find that I had pooped myself.  I remember standing up on the bathroom counter sobbing uncontrollably as my parents cleaned me up.  My drama made them feel very guilty.  This is how it lives in my head, although I'm sure the grownup perspective version is very very different.  I've often thought about this incident as I parent my daughter.   After she is out of diapers, I might be more inclined to go check on her in the middler of the night if she calls for me than I would have been if I didn't recall the feeling of needing to use the bathroom but being afraid to go by myself in the dark.

Three:  Desert Sun Preschool.  Water tables.  Sandboxes.  Teacher Nancy and her guitar.  The magic of going to school.  I remember it all.

Four: I was so tall, people thought I was six.

Five:  I *think* this is the year that The Little Mermaid came out.  I went to go see it with my Grandma Helen.  Loved the music, HATED Ursula.  Seriously, Disney, that octopus woman was terrifying.  At least PG, come on.  I was Ariel for Halloween.  I dreamed I would marry a man named Eric. 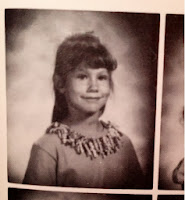 Six:  Pretty sure this is the age that I was rollerskating with my hands in the pockets of my tight jeans, and tripped on a piece of wood completely splitting my chin open.  First time in an ER, first stitches.

Seven:  I had my appendix out.  I remember the hospital's vanilla pudding, coloring in coloring books - a lot, and the red lady-bug outfit that I wore on the day I got to go home.

Eight:  My friends and I played pretend The Babysitters Club and usually fought over who got to be Mary Anne (probably because she had a boyfriend, Logan).  No one ever wanted to be Claudia, which is weird to me now because Claudia was clearly the coolest TBC member.

Nine:  Fourth grade was capital A-Awesome.  I learned calligraphy.  And algebra.  And one of my teachers who we only had one day a week let us build a friggin' simulated Rainforest in the classroom as a science project and for the younger grades to come through and tour.  On these tours, I don't know how I pulled this off but I got to hold the boa constrictor (this also started my "I want a snake as a pet" phase).   I realize now the irony of us using tons and tons of butcher paper to make an exhibit for the purpose of talking about the rainforest, a place that is becoming extinct because of trees being cut down.

Ten:  This was the year my sister was born (yay), my dog died (boo), my grandmother had a stroke (double boo), and my family moved to a different city (triple boo) -- all within six month time frame.  This arguably is when the harshness of real life hit me hard and I was forced to grow up.  Events and relationship from this year of my life would come up frequently in counseling sessions in years to follow.  I think the empathy that I have for young girls and the passion I have for working with them and mentoring them stems from what I went through in this year of my life.

Twelve:  There's a photograph out there somewhere of my entire sixth grade class out in the quad by our homeroom door, where I'm awkwardly standing off to side with my chubby cheeks and wearing a giant t-shirt, covering up my jean shorts, that has Tigger's giant face on the front (as in T-I-double-guh-RRRR) and Birkenstock sandals with socks.  My hair is stringy and my eyes are beedy.  I was so alone in the world.  I also got braces. I ate a lot of ice cream and watched a lot of Saved By the Bell reruns.

Thirteen: Played school and club volleyball.  Thinned out, a lot, and started wearing Abercrombie and Fitch.  Signed on to AOL Instant Messenger every night. 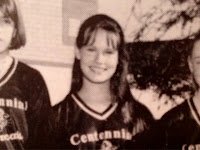 Fourteen:  My flower stenciled bedroom walls were covered in cut-up magazine photos of Leonardo DiCaprio, Chris O'Donnell, Jared Leto, Skeet Ulrich, Ben Affleck, Paul Walker (R.I.P.), and Noah Wyle.  I remember using a tape recorder to capture "Knock On Wood" by the Mighty Mighty Bosstones from the airwaves of 104.7fm so that I could listen to it whenever I wanted and learn all the lyrics.

Fifteen: Attending a girls-only prep school, my getting-ready routine went like this: shower at night then sleep in school uniform shirt and boxer shorts; wake up to the sound of my carpool ringing the doorbell; put hair in bun; pull plaid skirt over pajamas; lace up tennis-shoes; grab toast or bagel to eat on the half hour ride to school.

Sixteen:  Driver's license and cell phone changed my life.  So did AP Calculus (my favorite subject in high school). 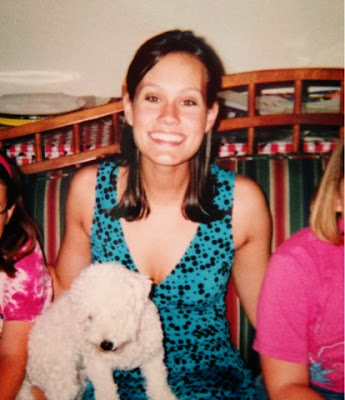 Seventeen:  My first job: teaching piano lessons out of my house.  I charged $25/hr and had eleven students covering two days a week.  It was the funnest, easiest, most rewarding job a high school girl could ever have.

Eighteen:  My boyfriend's parents gave me a monogrammed Tiffany necklace for my 18th birthday.  I didn't even know what Tiffany was, but a gesture so mature and so timeless would not be fortuitous for the relationship.  To this day I maintain that serious relationships in high school are bad news for everyone involved, and I discourage any teens who will listen to me from getting into them.  (Although, I applaud and sincerely admire married couples who were high school sweethearts.)

Nineteen: The summer after my freshman year of college, I went to France and Italy with my parents and got to see a lot of the art I had just finished learning about in the two Art History courses I had just taken the final exam in.

Twenty:  After life-shattering heartbreak (not worth elaboration.), I started playing music with a group of guys I met through school, which would later become the first band I ever played in.  An identity crisis if I ever had one, turned into learning a lot about the world and a scene that my goody-two-shoes self would have never experienced without taking a few risks.  In this period of my life, I ended up with a tattoo and a few items crossed off my "I've never" list.  And that's all I'll say about that.  I miss these guys to this day, they will always have a special place in my heart and my memories.

Twenty-one:  After graduating from college, I moved back to Arizona, bought a condo, and started my career in the defense industry.  So much Ann Taylor in my life.

Twenty-two:  When my little sister got her ears pierced, I got a second hole pierced in mine so that she could see that it wasn't so bad.

Twenty-three / Twenty-four:  This was my favorite pre-Daniel phase with no close second.   I combined these two years because so much went on in my life that I can't remember exactly how old I was for different things.  This was the time of my one-year dating fast (best decision ever).  I played sand volleyball, lived with my cousin, went to Costa Rica on a yoga retreat, got back into my faith, traveled a ton and focused hard on my job.  Life was great.

Twenty-five:  The first time I rented a car by myself, I was in Denver, Colorado for a business trip.  When I got into the car on the driver's side, I noticed that someone had forgotten something on the passenger seat, so I grabbed it and went back inside to see if they had a lost and found. I was informed by the clerk that it was an ice-scraper.  I had never seen one before, and to this day I wouldn't know how to use one.

Twenty-six:  I met my husband.  We were quickly engaged and marriage preparation / wedding planning basically dominated my life.  I started this blog.  I also moved back in with my parents (another best decision ever) and got to keep it traditional while relishing the last time my little sister, a senior in high school, and I would probably ever live in the same house.

Twenty-seven:  Got married. Got pregnant.  Took out my belly button ring.

Twenty-eight:  Got dogs. Got baby. (you can read all about all of this in blog archives)


Twenty-nine:  I will always remember this age as when I truly felt like I grew up.  Maybe it's because I have a kid under my roof, so I don't get to be a kid anymore myself.  Maybe it's because I left my job in the corporate world and am doing what my heartstrings were tugging at me to do all the while.   Or maybe it's from the two + years of marriage and growing in my role as a wife and everything that comes with that.  Maybe it's because of all the grey hairs on my head and unstylish clothing I find so comfortable.


Remember when thirty seemed like it would feel so old?
Tomorrow, I'll let you know.