And exactly 25 pounds (with shoes), per the big-girl scale at the doctor's office.  We just visited the pediatrician for a gnarly red itchy diaper- and leg-rash that turned out to be... shocker... just dry skin.  Bring on the jojoba and lavender.  Anyway, it was cool to get an unexpected weight check.  She's wearing size 4 diapers and size 6 shoes (and growing fast).  Size 24-month onesie pajamas are baggy in the middle but the feet are too tight for her big toes.

Her hair is long enough now that I have to move it before clasping a bib.  By "hair" I mean the mullet tail that graces the back of her neck.  Sometimes I split it and pull it to the front to make it look like she has sweet curls on the sides... but don't be deceived, it's actually a mullet.  And it does not like to be combed. Or washed.

She's got an obsession with babies and baby dolls.  For a while she had one doll she was calling "Baybo" but now they are all just "babies" and "baby dolls."  She tends to them very sweet and nurturely like, until she's done and throws them on the floor. 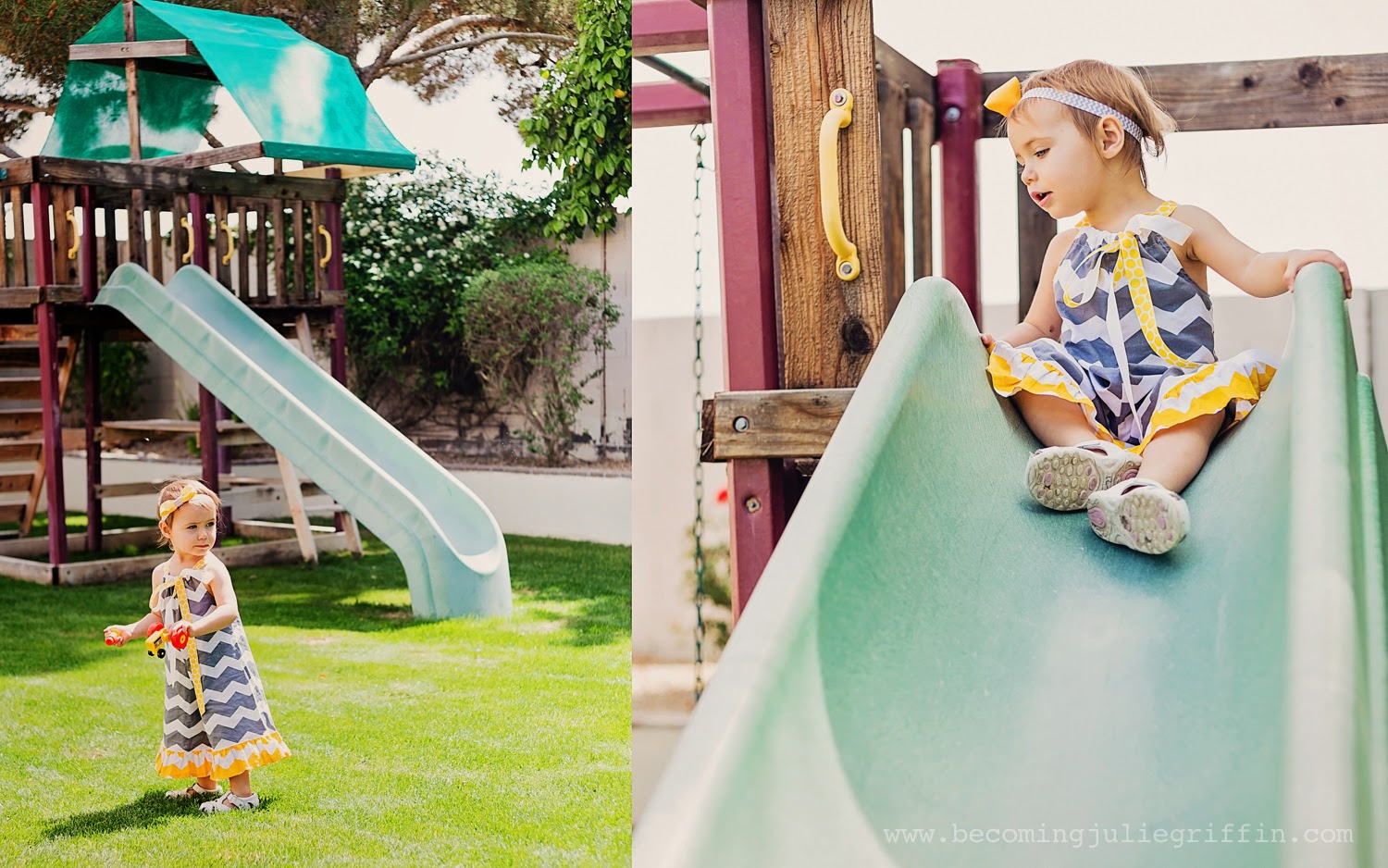 Earmarks of this stage:
-Putting her stool on top of the table for stadium seating in the family room.
-Using step stools to get where she wants.
-Snorting like a pig.
-Eating ketchup with her fingers.
-Telling people they are funny and then doing a fake laugh.
-Insisting on washing my pregnant belly for me in the shower.
-Saying please ("peees") to ensure she'll get what she wants.
-Doing all the motions of itsy bitsy spider three seconds ahead of the lyrics.
-Bossing the dogs around, unsuccessfully.
-Going up and down stairs, unassisted, without holding on to any rails (this still makes me nervous).

She's had her first ice cream cone (that was all her own) and first Oreo cookies.  She eats well with utensils, ahem when she wants to, although she regularly chooses to make a mess.  She also likes to clean up things that are "messy messy" which has almost doubled our baby wipe consumption.

She likes to put things "back" or "away" or in the trash if that's where they go.  She asks for "help" instead of getting frustrated (most of the time), and comes to me with an "owie" for a kiss to make it all better instead of melting down (unless she's really hurt).   Some other fun phrases you might here from her right now are "Ready. Set. Go!" "Oh hey." "Oh boy!"  "Oh man!" "Oh Mommy!"  "It's OK".    I am trying to teach "No, thank you" and "yes, Mommy" or "yes, Daddy" but it's usually just "no no."   Sometimes she talks in her sleep.  She knows all of her colors.  I feel like her vocabulary grows exponentially every day.    The other day she was reading an alphabet book in her room while I was organizing her shoes, and she exclaimed "Mommy! Q! Queen!" pointing at the queen on the Q page.  It stopped me in my tracks, I didn't know she had been paying that much attention.   My mom's grandma name has been changed from "Mimi" to "Meemo" (like Finding Meemo), out of nowhere.

Penny gravitates towards purple and blue crayons when given the option.  Other than crayons, she gravitates toward anything pink.  I cringe at the thought of her asking for a Barbie some day but I know it's coming.  At least she also loves her "bike" (which is also pink).

Separation anxiety has been tough with babysitters these last couple of months.  She spends so much time being "babysat" by her grandparents and aunt, that when we have actual other babysitters, it's rough.  I don't lose too much sleep over this because we don't hire babysitters often, but I do hope it's just a phase.

She's not nursing any more, weened her at the beginning of April.  I miss our morning nursing snuggles, but most mornings now it has been replaced with cuddles on the couch watching Sesame Street and drinking almond milk -- I'll take it.   Since then, she has only tried once and it was no big deal that she couldn't.   In this instance, I told her that the milk was all gone, we were saving it for the new baby, and she didn't pursue it further.  I patted myself on the back for nursing 20 months and through a first trimester of pregnancy number two.

Speaking of the pregnancy, did I announce on the blog that we are having another girl???!?!?!?  Along those lines, we are teaching Penny that her "baby sister" is in Mommy's tummy.   Some days she gets it right, but other days she says jokingly, "No, baby boy." and think she's pretty funny.  It baffles me that she understands that babies are either boys or girls, and that she gets the irony of saying it's a boy when we tell her it's a girl.

We are working on her new big girl room.  We are super stoked to work with our super cool neighbor with super style and super skills on some design stuff for the new room.  More on that in months to come.  For now, it's painted and my mom is making a quilt for her bedspread.  Penny probably won't move in to the big girl room until baby #2 moves into the nursery several months after she's born.  But it's fun to plan now.

I am thrilled at the thought of Penny and a SISTER.  I'm super giddy about being able to re-use the whole baby girl wardrobe.  I'm thrilled at the thought of Dan being Daddy to TWO little girls (he's already mentally preparing himself for having two pre-teens in a decade.).  More than any of that, sisters have such a special relationship, I am elated that my girls will be so close in age.

That's all for my ramblings for now.  I'm getting less diligent about logging Penny's milestones in baby book fashion.  They told me this would happen when there were two kids in the mix.  I hope you all don't mind that I use the blog to capture these things, because even though I've skipped a few months, I sure do love to go back and read the blog entries from her various ages.

Here are a few photos from Penny's first Easter egg hunt.  She totally got it.  Also, I started the tradition of putting a new swimsuit in her Easter basket every year, just like my mom did with me and my sister :)