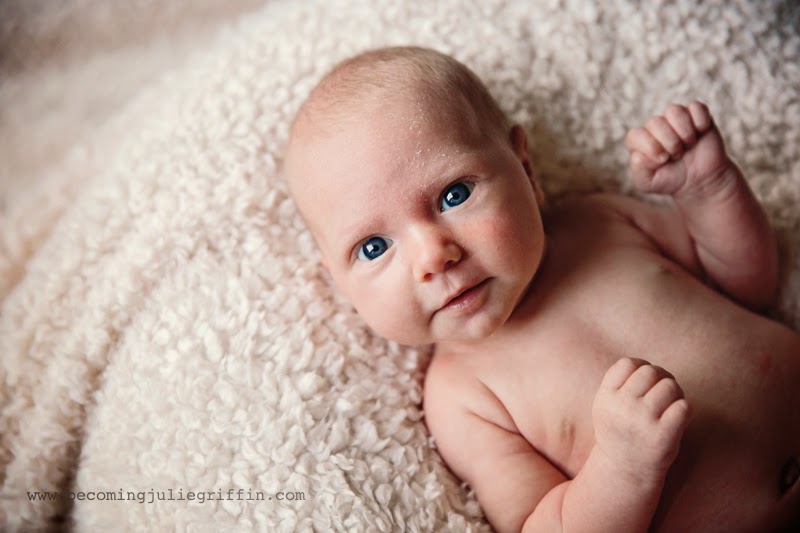 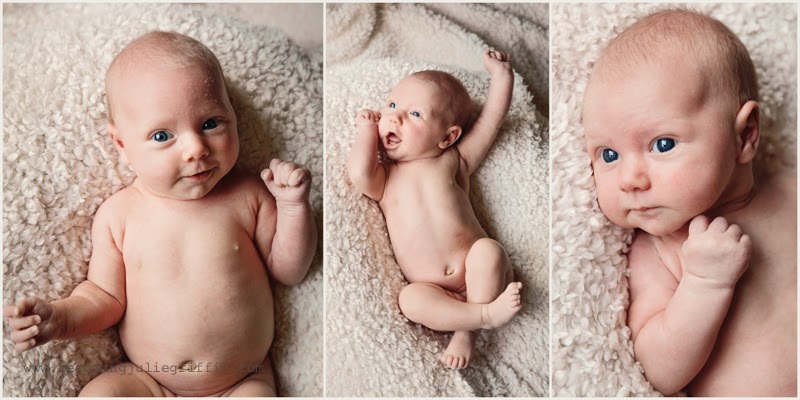 This has been the fastest month of my life.  I can't believe I'm blogging this right now.

I don't know exactly how much our littlest one weighs because we haven't made any visits to the doctor or breastfeeding group in the last couple of weeks, but when I weighed her at home today on the grownup scale (in my arms) she weighed in at just under ten pounds.  She's also pretty long and has outgrown all the newborn-size pajamas and some of the 0-3mo clothes (depending on the brand) due to her length and giant feet.

Josephine's new baby fuzz hairs are coming in very blonde. I am hopeful that these hairs thrive and don't fall out so that she won't go through the same bald-man cul-de-sac phase that her sister did.  It would be so cool if her hair went red like my grandmother's, I've always wanted a redhead in my brood of offspring.

Her eyelashes finally came in (she was born without any) and her eyes are still blue blue blue, I think it's going to stick.  She no longer has dry skin all over her body, now it's just mainly on her forehead (you can see it in the photos, I chose not to edit it out!).  Her skin is fair and sensitive, and she gets red and blotchy when she touches certain fabrics or is held by someone wearing strong perfume.  She's got little fat rolls developing on her arms and thighs that I just wanna pinch all the time.  She's sturdy and very alive in her demeanor.

Little Josie finally took a pacifier at about 3 weeks. I had forgotten what it's like to have a baby who can't pick up her own pacifier and put it in her mouth by herself.  So much checking and replacing and digging in the car seat.  I also had forgotten what a relief it is to have the pacifier option!  It's like instant relief.  I love to watch her take it and be immediately soothed.

In one month she has had five baths, four of which came only because she got poop all over herself in a massive diaper blowout.  Baffling how a bum so small, pointed in the downward direction, could project excrement so high and with such gusto onto one's back.  I've thrown away two onesies because there was just too much to make it worth trying to clean.  Sorry that was gross.  But it is, gross.   She didn't like her first two baths, but I think I've got a better system now and she doesn't seem to mind them.

She expresses herself a lot with grunting.  We call her "Grunty" as a nickname (we should probably stop, lest big sister pick up on it and use it for life).  When she's fussy, it almost always involves something needing to go in or come out of her body.  Other than that, she's very calm and composed and observant.

Her eye contact and head control / neck strength seem advanced.  She's smiling a little, and cooing a little. She tracks the big kids, like Penny and her cousins, with much interest.  She seems to like peek-a-boo.  We say "Peek-a-Boo Josie Lu!" and might get a little smile.

I think I have a little bit of oversupply going on (which I attribute to my placenta pills) and I think I have a faster flow this time around.  She nurses for only about five minutes per feeding (so fast, right?) and is gaining weight like a champ.  Our pediatrician noted that she might have been overeating in the beginning, which would account for all the barfing and the tummy discomfort she had, and so I've been spacing our her feedings a little bit, and cutting her off when she starts to get antagonistic at the boob.  She gets the hiccups after every feeding which is adorable.  She spits up after almost every feeding which is not so adorable, but it's  not so bad.

I have no complaints.  I don't do schedules or sleep training at this age, but she is pretty much like clockwork during the day, sleeping two hours at a time and then awake for about an hour and a half in between.  She is very predictable and I can tell when she is hungry versus when she is just tired and wants to be swaddled and left alone so she can sleep.  She doesn't "need" to be held to help her fall asleep, which is kind of sad because, well it means less cuddle time, but also kind of wonderful since she's not my first baby and I can't just sit around and stare at her all day.  She also sleeps well when I wear her in my wrap, or in the car seat.  At night time, she wakes up about every three hours to feed but usually goes right back to sleep unless she's working on filling up a diaper (or three), which could take up to an hour.  Those are the nights I do a lot of blog-drafting or list-making on my phone.  Or I stalk your Facebook pages.   :)
We love our little Josie girl.