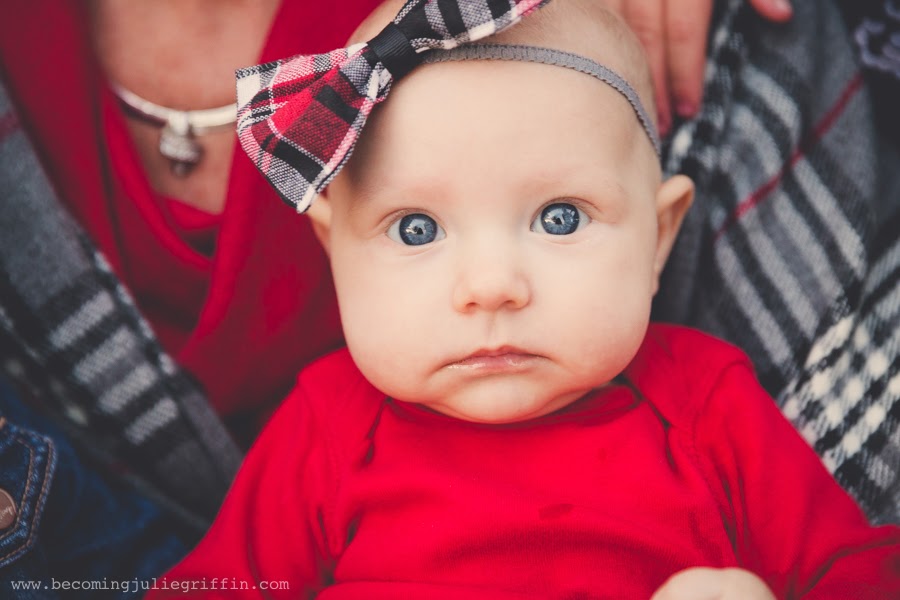 This girl is long. She's already filling up size 6mo pajamas in the feet, though they're still baggy in the mid section.  She's not an extremely chunky baby but she does have some pretty prominent cheek jowls and fat-rolls on each thigh.  She has long fingers and feet. No birthmarks.

Eyes are dark blue, hair (the minimal amount she has) is blond. She has a hilarious baby mullet, like pretty much a strip across the top of her neck.

She's starting to look very robust to me, and she's extremely strong in the torso and neck for a three-month-old.

She wants to be a big kid.  She wants to see what's going on. She loves phones and TV screens. She has giggled a few times. She has rolled over a few times (back to front). She's very alert and interested in people's faces.  Loves to chew daddy's thumbs.  She's also discovered her own hands and feet.  She's got a very easy-going disposition and is extremely generous with smiles and coos.  Her favorite thing to do is read books on the floor of big sister's room.  She's really cute when she gets mad too, like she's trying to tell at us that she wants something but it's in her own little language.  She's also started doing the thing where she (attempts to) grab things with her hands and corral them into her mouth. We think she's already teething.

She nurses every two to four hours and is very efficient, nursing usually only one side per feeding and only for about four minutes.  She's at that distractable age where she will pop off to look around then come back, which is adorable but can be cumbersome when nursing in public.  She is already showing an interest in real food. She so wants to be a big kid.

My dream of her being on the verge of sleeping through the night is not coming true.  She can't decide if she wants to be swaddled or not.  She can't decide if she wants to cuddle or not.  I think she's had a couple growth spurts, plus the temperature change, so we just can't seem to get a consistent rhythm going.   Most nights she is back and forth between our bed and a pack'n'play in our room.  One thing I am thankful for though is that she is not awake for long periods in the middle of the night. She wakes up and fidgets, then after a pacifier adjustment or maybe a dream-feed, she goes right back to sleep. I can count on about 11 to 12 "sleeping" hours from her at night, even if she wakes up a few times in the middle.  During the day she is typically awake for about two hours and then naps for 45 minutes, kind of all day long. Some afternoons I get lucky and she will take a long nap at the same time that Penny takes her nap. Those days are the best!

Things other people say about her that are more credible coming from them (and not me, since I'm obviously bias) are: how sweet and agreeable she is; how strong and alert she is; how much she looks like a Cole (my side of the family); how bright-eyed she is.