About a week late, here's the latest ramblings on our little girl.


I think she weighs approximately 21 or 22 pounds.  She's still wearing mostly size 12-18 month shirts and pajamas, but the pants are way too short.  Shoe size is 5.5.  She's trying to learn to run and falls down often.  As soon as one bump or bruise on her body is about to heal, it seems like she's bound to get another one, but I supposed that's the way it goes with toddlers. 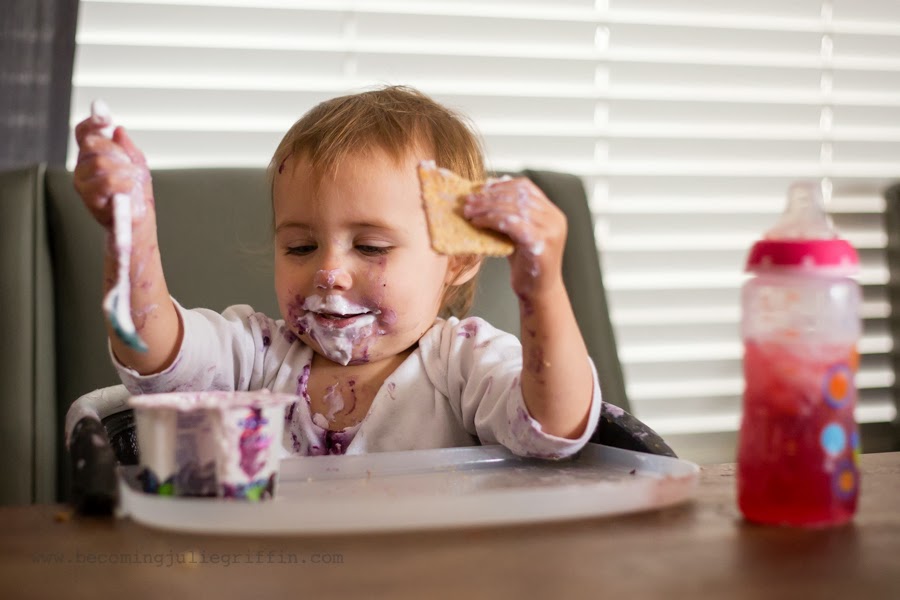 She eats pretty well with a fork and spoon and wants to do everything by herself (like, two-year-old status).  Those molars she worked on for two months sure have come in hand, she chews food like a grownup now, even things like nuts and salad (though we probably won't try tortilla chips again for a while after the almost-choking incident last summer).  She also likes role reversal, feeding a "bite" to the grownup next to her, sometimes even doing a modified airplane landing near his or her face.  Lucky you if you sit next to her at a dinner party.  Speaking of airplanes, if you missed it, you can read about her first airplane trip here.

Her dance moves now include the spin-around, the arm-whirl, the side-to-side, the stomp-stomp, and the bootie-bounce.  Other favorite moves are scurrying away (I say scurrying because "running" wouldn't quite be accurate) in a game of chase, climbing onto the couch and stomping from one end to the other.  This is one of those things I probably shouldn't have let her start... but we have a cheap couch.  Into the realm of pretending: on command, Penny will be a chicken, a monkey or a dog.  She can also make the sounds of a cow, kitty, owl, horse, and fish.  We're working on snake.

A quirk: We have these stacking cups that she plays with in the shower.  From largest to smallest, they stack blue, green, yellow then red.  Penny refuses to let all four cups be stacked together, pairing only the yellow with the green, and the red with the blue.  She gets very upset of you disrupt this combination.  VERY upset.  Hopefully this is not a glimpse of any obsessive compulsive tendencies.  At least she's consistent.

Another favorite toy is the pink hand-me-down scooter from cousin Hope.  She will push and pull that thing all day long.  Around the kitchen, around the basement, down the street, all the way to the park some days.  She also does not like for others to interfere with her scooter-pushing, even if she's trying to get it down a flight of stairs.

She's been sleeping about 11 hours every night, and napping almost 3 hours every afternoon.  I sort of feel spoiled, but I also feel like I earned it, I mean the kid didn't sleep consistently through the night until she was over 8-months-old.

Every time I think we've turned a corner in our teeth-brushing routine, it seems she hits a wall again.  Molars go fine, but she does not like when I do her tops and bottoms so much so that I have to hold her hands down and put her in a modified gentle head lock most nights to get them.  She gets over it quickly and the next time around she's always eager to brush her teeth, so I don't think I'm scarring her for life, but I do look forward to a day when she readily offers me those pearly whites for a good scrubbing.  She also likes to brush my teeth for me, a fun experience for one of us.  I figure it's only fair.

We're gradually entering into the territory of sharing and taking turns.  We have a very hard time letting a friend (even if it's a dog) play with or have something that we think is rightfully ours.  I think I might actually need to read some parenting books on this one, I didn't expect sharing to be so. incredibly. devastating.   Example: She'll pick up Apollo's ball, entice him over, throw it for him, then cry like somebody died when it's in his mouth and she doesn't have it anymore.  "Mama, ball, ball" she says between sobs.  It's so irrational but so real to her.  I try not to laugh and instead acknowledge and talk her through her feelings: "I know you're disappointed, but that's Apollo's ball and it's his turn to have it (plus you threw it for him)."  I can't make this stuff up.

In the mornings after nursing in "Mommy's bed" she hands me my phone and says "Mulmo" indicating she wants to watch Elmo videos on YouTube.  I'm not a morning person, so most days I indulge and even close my eyes a little bit more.  Dan is not a fan of this habit, I say it could be worse.

We're still breast-feeding 2-3 times per day but I've also introduced (chocolate) almond milk to get some extra calcium in her.  She does not like dairy milk or plain almond milk.  We call the almond milk her "milkshake" to get her to drink it -- thinking maybe she's got a little bit of her mama's sweet tooth in her.  Most days she'd much rather have apple or cranberry juice (very much diluted), or whatever I'm drinking.

We are working on "Please" and "Thank You" but neither are taking, yet.  She uses "Oh!" for either I like this, I want this, I need help with this, I've discovered this, or This is for you.  She's very expressive with her pointing and nodding and her eye brows.

Eighteen months is my favorite age so far.

Here are some photos from our recent trip to the Butterfly Wonderland, perfect for this age. 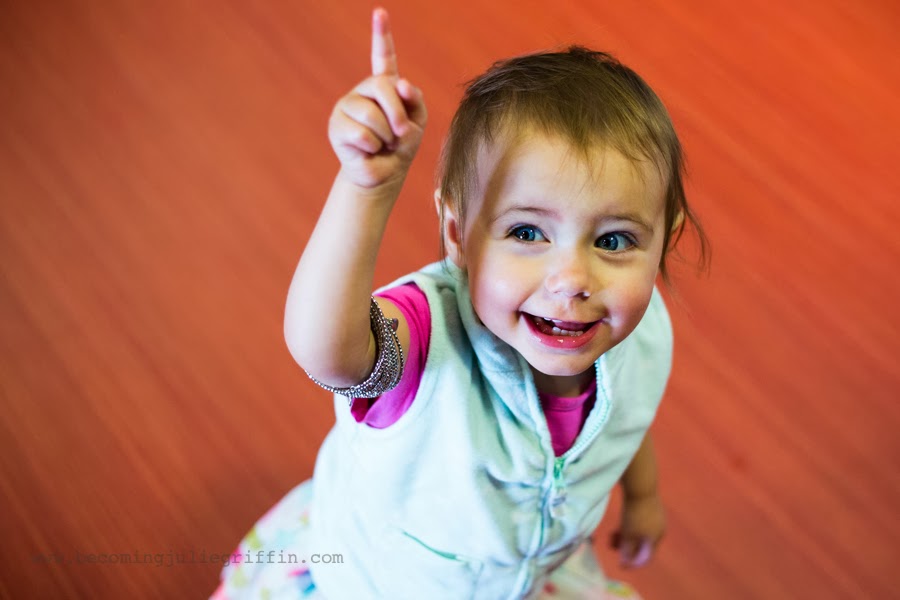 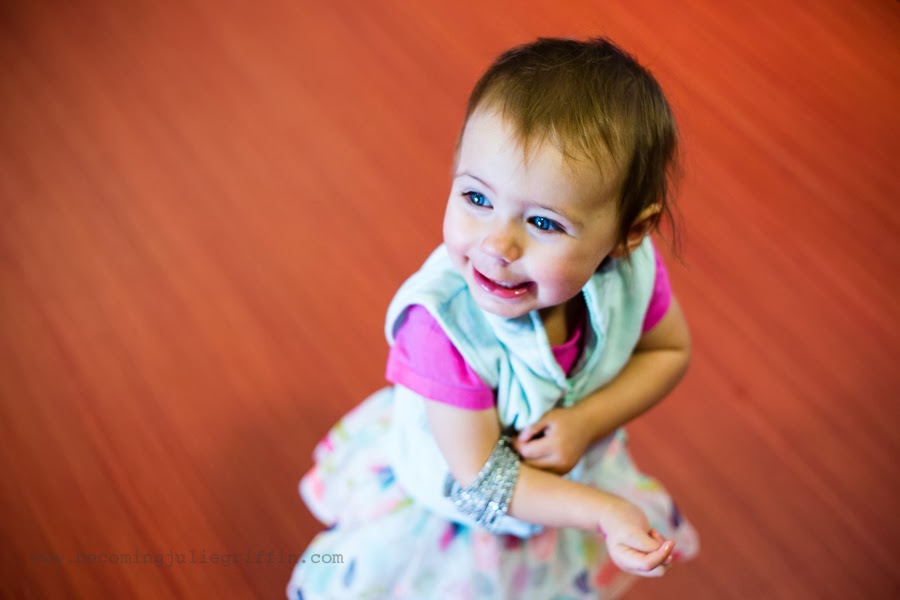 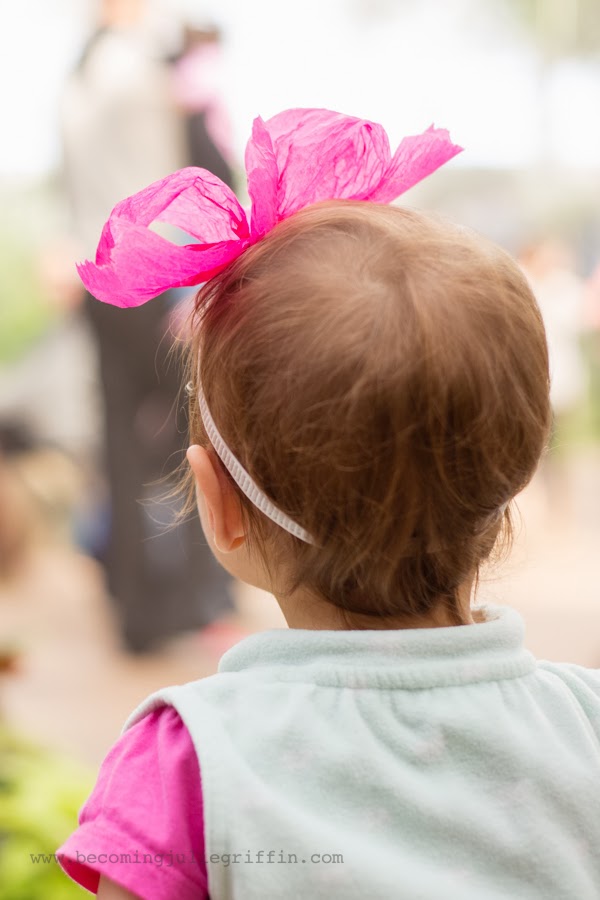 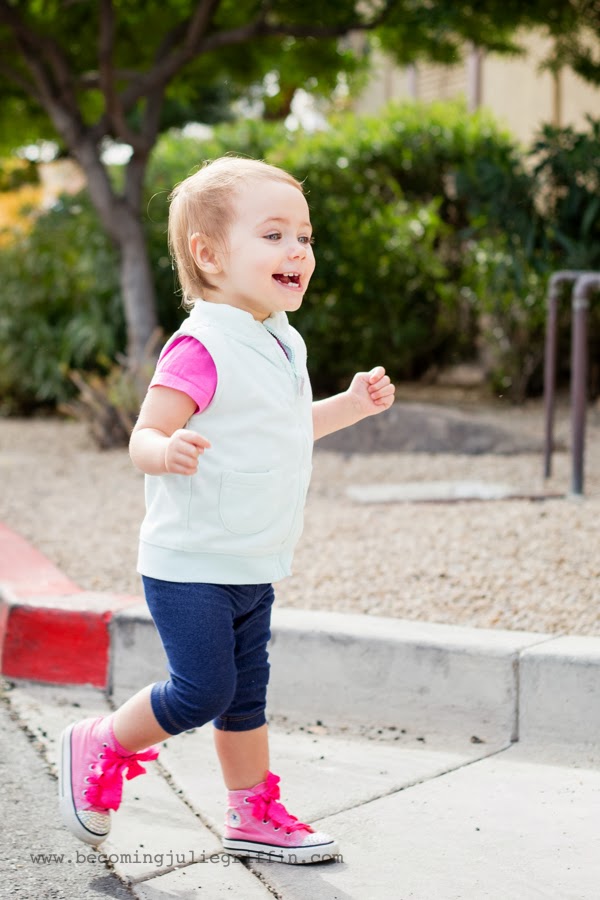 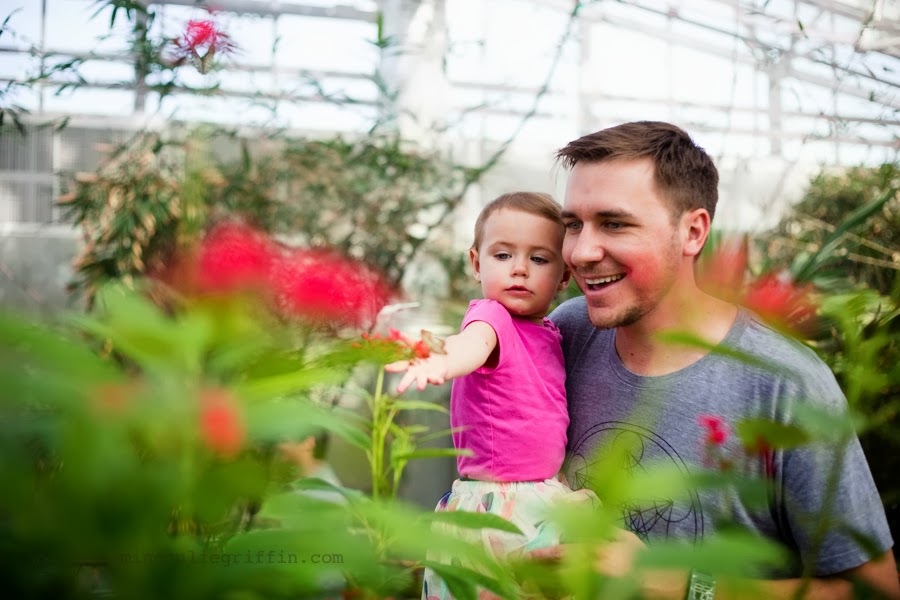 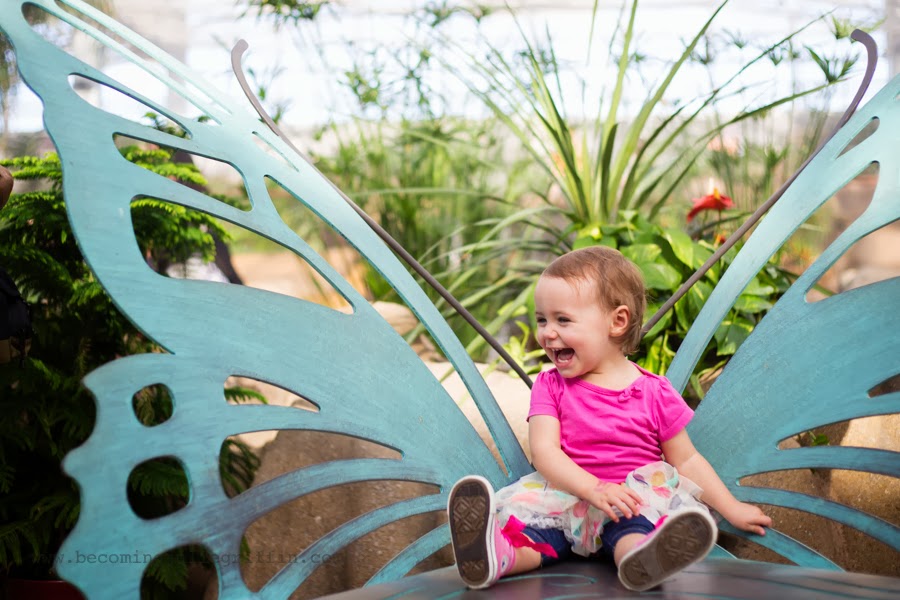 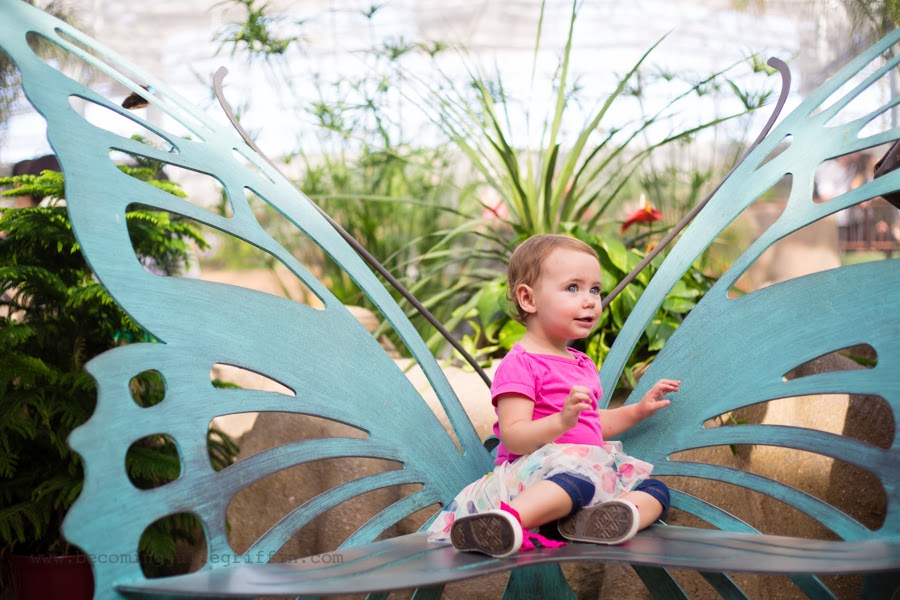 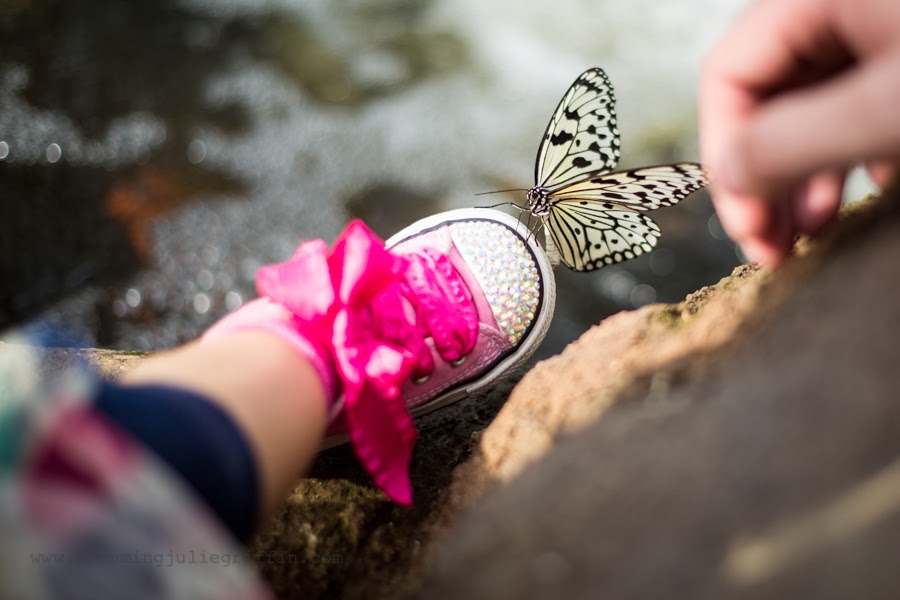