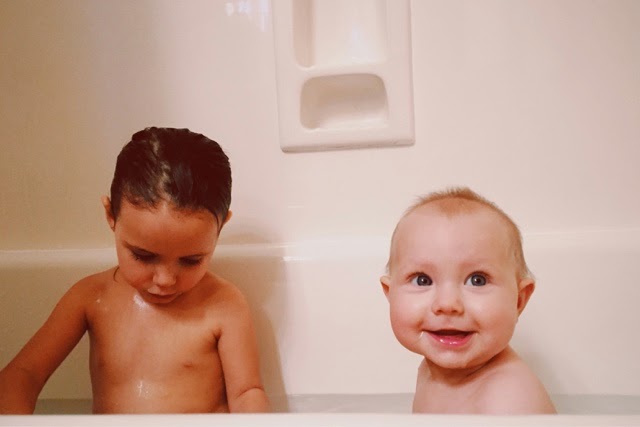 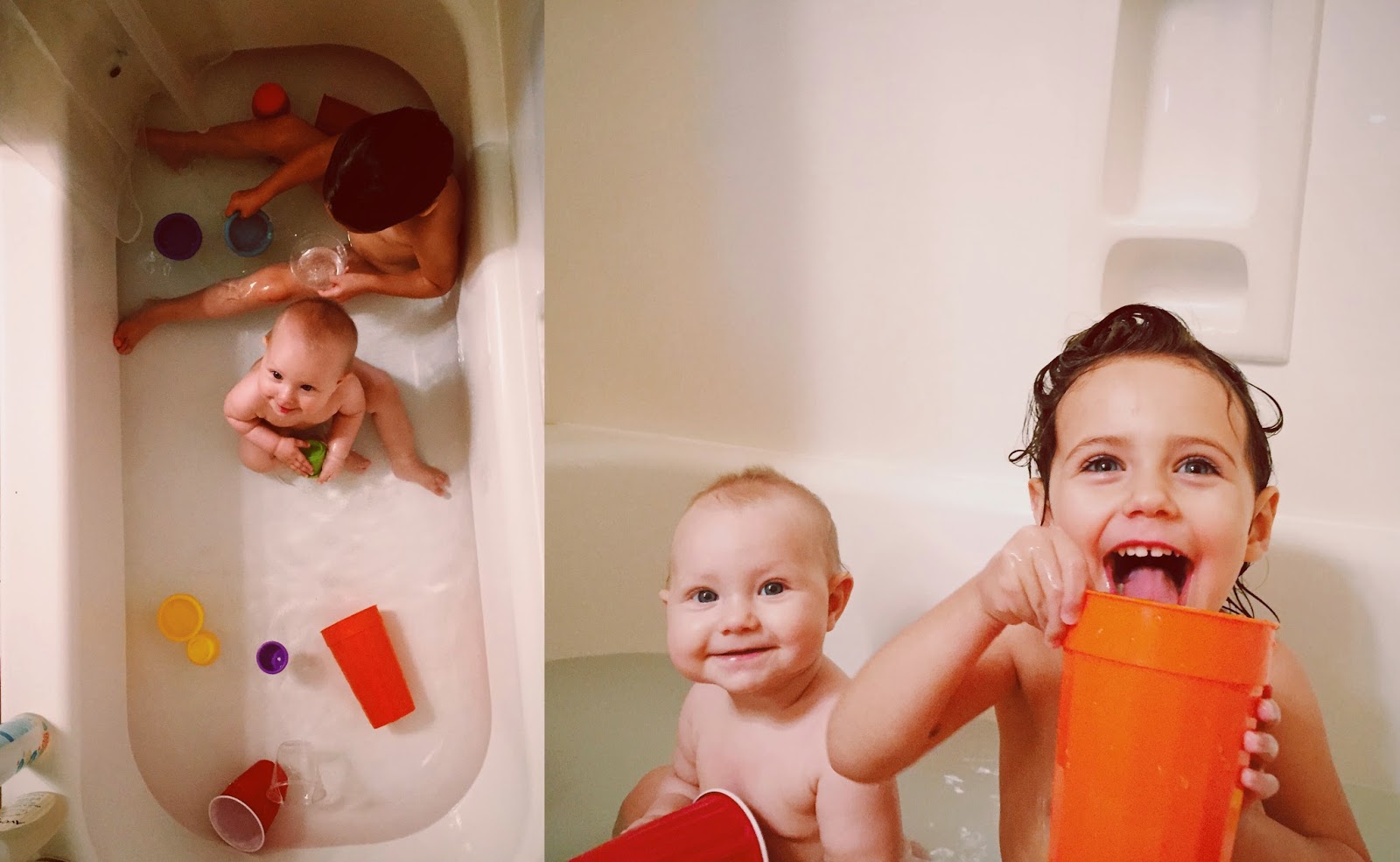 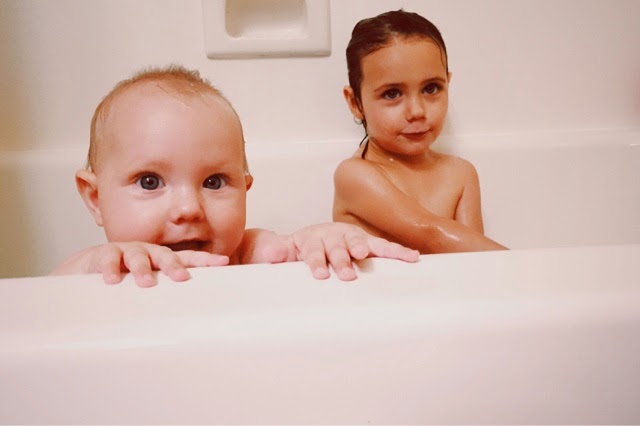 Can I go with you to your kitchen? Can I have a bite of your food? Actually can I just have your whole spoon? Can I follow you into your room?  Mind if I climb on you?  Will you go through the tunnel with me again?  Can I hold that toy you've got in your hands? Can I grab you face, I just wanna see if your cheeks are as squishy as Mommy's. Can I look at that book with you?  Can I specifically have one of your blue blocks instead of this green block?  Can you dance for me? Is there anything in the whole world better than BATH TIME?!?!  AHHHHHHH I LOVE BATH TIME SO MUCH I COULD YELL ABOUT IT ALL NIGHT!!!!!!!!

Top Baby Blogs has just done their quarterly (I think?) reset, which means we are back to zero, zip, nada, double donuts.

If you find yourself "liking" my posts on Facebook, or venturing over here to this little blog often, you can show your love every day with a vote for Becoming Julie Griffin on TBB ... but especially today and tomorrow!  It's just two clicks and I so appreciate the support!

conveniently located at the bottom of most of my posts,
or you can always use the button up there on the right if you are in a web browser.

Being ranked [somewhat] highly in the Top Baby Blogs directory means I get to tell my story to more people all over the place, and who knows what could come of it!

Here's Dan and I on our wedding day.  Today's our anniversary.  A few weeks ago we looked through our wedding album with Penny and Josie and the toddler asked "who's that booful princess?"
She did a double-take when Dan told her it was Mommy.  Guess I clean up real nice when I'm a size eight :)

Five years ago right now, (this very minute) I met my husband in person for the first time.

We were set up.  I protested the match-making at first, but when I heard how tall he was, I agreed.  I also found him interesting enough from the emails we'd been exchanging that I truly was looking forward to meeting him when the time came, but if we're being honest though, I had little interest in being set up in general, or going on "dates" for that matter.  I was still shaking off a very dysfunctional pseudo-relationship [I shudder] of almost a year, and really just barely welcomed a fresh evening out with someone new; low hopes and certainly zero expectation that I would some day marry the guy.  Not to his discredit: that's just the place I was in before I met him.   The mind and heart 'place' that we are in when we meet someone, I think, is the most important variable for dating with purpose.  Not saying I was in the 'right' place, but something must have been right... right?    I think he would say he was in a similar place: he didn't ask to be set up, nor was he secretly hoping he'd meet his bride any time soon (or maybe ever).

We were to meet at Barnes & Noble after work on a Thursday, and then walk to a nearby tea place for coffee / hot chocolate.

Dan was waiting for me in the magazine section.  He was tall indeed.  He was wearing a blue shirt and he had amazing blue eyes, a great smile, strong handshake, and a weird haircut (... I can say this five years later, right?).   He would probably say that he thought I was beautiful, but a bit standoffish in my black turtleneck and fake-ish confidence.   Dan is extremely perceptive about people, especially when they are trying to put off a vibe that they've got it all figured out when really they don't.  I'm sure he picked up on some brokenness from me that night... why he chose to pursue me I don't know, but I'm sure glad he did.

We would go on to enjoy those hot beverages and talk religion.  Then we would walk to another spot for dinner and talk music and culture and opportunities.  Later we would find a nearby fire pit and sit and talk some more about life, goals, relationships, family, and basically all the topics you'd have to address if you were filling out a questionnaire for a dating service slash job interview.  We had a good time indeed, but this was not a flippant experience.   I would compare our level of honesty and vulnerability in this loooong conversation to that which you might have in a situation where you thought you might never see the other person again.  Like if you sat next to a counselor an airplane or something.  We covered a lot.

Almost seven hours we spent together that night.

We closed down the shopping center where we had bunkered down for the last part of the evening, and then walked out to our cars out in front of the bookstore, which were coincidentally parked right next to each other in the empty parking lot.

Dan says he knew that very night that he was going to [try to] marry me.  Isn't that adorable?  He would go on to pursue me thoroughly and intentionally, perhaps a metaphor for the patience and tenacity he would need to balance out my insecurities and stubbornness for the rest of our life together.

From where I sat, the guy with the great smile and weird haircut was interesting and easy to talk to, warm and witty, and I knew I wanted to spend more time with him.  But I don't want to romanticize it and say it was love at first sight for me.  It wasn't.   It was two adults, baggage in hand, lots of history and hurt behind us, on a purposeful and careful path.  And this was just the first step... mere inches in the walk we're walking together now.

I grew to really commitedly love Dan pretty quickly, as modern culture would assert.  We were engaged two months later, and one day + one year after our first date, we got married.

Why do I tell this story here on the eve of our fourth wedding anniversary?  Not really sure.  But maybe some single girl out there is reading this and she's where I was when I put on that black turtleneck and pulled into the Barnes & Noble parking lot.  To her I say: Go on that date.  Talk to him honestly and thoroughly, and if he does the same, let him court you.  You just might find he's the greatest man of all.

The blog, that is.
What's going on with us is: a complete rearrangement of our work spaces, flip flopping office and study and all the furniture and guts thereof.  You know what happens when you move your office stuff? You have to go through your office stuff.  All the papers.  Bleh.
Dan, good at the macro, and me, good at the micro, are sort of working together and sort of working separately.  Sort of just trying to keep it all together in the chaos.  And sort of also trying to do a bunch of other things.
Not much from me here today, but big exciting things to come for my photography business and hopefully the general zen of our home.  In the mean time, heaven help us. 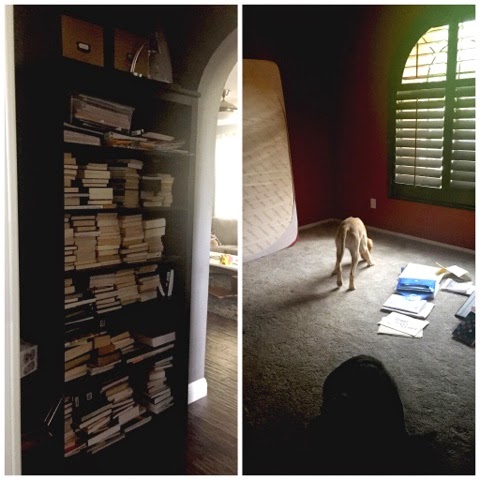 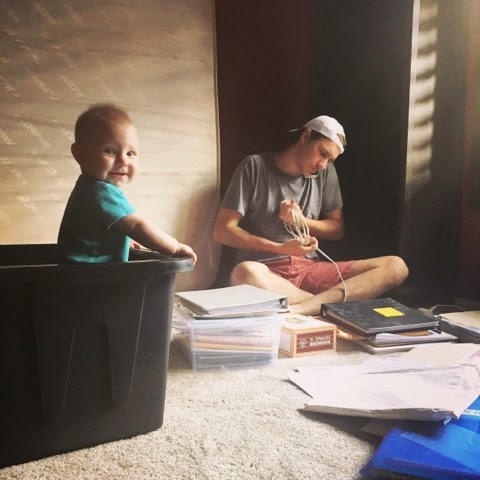