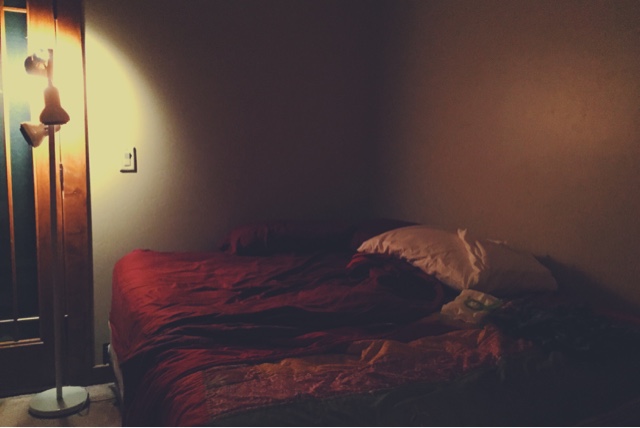 It occurred to me tonight that I haven't gotten more than four hours of consecutive sleep in over a year-and-a-half.  I was entering Josie's crib room (me and the girls are away from home at my parents' cabin right now) where I found her standing at the edge of her crib, completely covered in snot and tears, begging to be held and nursed and cuddled.  Only an hour and a half after she went to bed.

She's been sleeping only about two to three-hour stretches during the night due to teething and, well, being a horrible sleeper.  There was that one night when she was three months old that she slept for nine hours straight, but of course I woke up ten times because my boobs hurt or I was paranoid that she hadn't woken up.
I mostly blame myself for co-sleeping too long and sleep-training too late.  I'm exhausted.   Even on the nights when I actually go to bed early (when the kids go to bed) instead of staying up to get work done, I'm still awoken a couple hours later and then every few hours after that until the next day begins.   And boo sleep training.   It wasn't this impossible with Penny.   And even if I wanted to go back to the co-sleeping attachment-parent strategy so she'd sleep longer stretches and I wouldn't have to get out of bed (which is why we co-slept so long this time), that still means terrible sleep for me because... paranoid she'll fall out of bed (again), nipple pinching and nostril clawing all night, nowhere to put my arm, baby kicks to the face...
Haven't had a baby yet and wanna know what it's like getting up and nursing in the middle of the night? When you go to bed, set a timer to go off in two hours.  When it goes off, get up and walk two laps around your family room.  Then either lay down or sit in a rocking chair and balance a large book on your left shoulder for five minutes then your right shoulder for five minutes.  Try to relax your neck. Try not to wake your spouse.   If you can fall back asleep balancing the book on your shoulder without it falling off, more power to you, otherwise go put the book back on the shelf.  Go pee if you have to.  Set another timer for three hours, then go back to sleep.  Repeat until morning.
Josie's almost ten months old now but the longer period of not getting good sleep traces back to my entire pregnancy with her.  I was either barfing, having hip and back pain, or had to pee in the middle of the night all 39 weeks.  It's no wonder I feel like I'm not at the top of my game at anything I'm up to these days. For reals, 18 months of bad sleep.
Go to sleep. Yeah. I wish sleep was a place I could go, without my kids.
Tell me there is light at the end of the tunnel?  That some day I will get to sleep again?  I'm at a point where most nights I say to myself, "what's the point in going to bed at all, she's just going to wake you up in 3...2...1..."