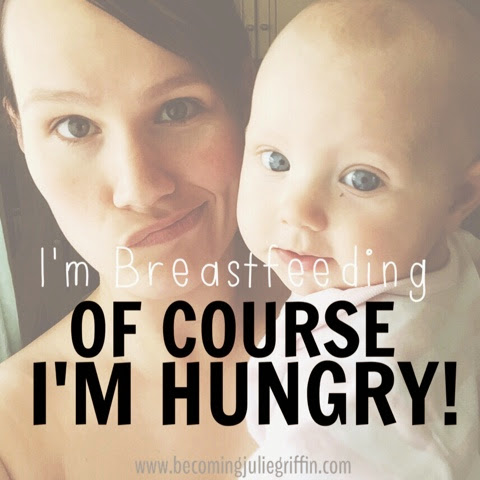 I've read it, and I've heard it said, and I call bunk.

This may be true for some of you magical breastfeeding unicorns, but my experience is that the urge to eat -- all the time eat -- is way more intense during breastfeeding than it ever was during pregnancy.  Pretty logical actually, your body is sustaining another human being's life, and that human being is bigger and busier when she's out of the womb...

I'm gonna go ahead and guess that breastfeeding does NOT make most women lose weight.  In fact, how many of you have actually gained weight while breastfeeding?   I'm not there yet, but I know it happens, and I think that's ok.  Breastfeeding > Squeezing back into my favorite jeans.

I've never met a long-haul breastfeeder (we'll define "long-haul" as nursing longer than one year without supplementing with formula) who got all skinny again quickly after baby was born.  In fact, I'm pretty sure every single new mom I've ever met who was preoccupied with weight loss during the first few months, ended up having milk supply issues and quitting breastfeeding sooner than she wanted to.

That's not to say that everyone who quits nursing does it because they are preoccupied with weight loss.  Or that every new mom who thinks about weight loss will have to quit nursing.   And [while I'm disclaiming,] I'm certainly not saying that everyone has to breastfeed their babies.  If formula's your gig, your baby and my baby can still be friends, and I promise I won't be jeally of your unlimited dairy and alcohol consumption if you won't be jeally of my big nursing boobs.

What I am saying is that it's totally normal to have an intense appetite when you're body is producing breastmilk as the sole source of nutrition for your child.

Hungry is your body's way of saying "I hafta eat so I can do my job!"

And for me it's like clockwork, I have to eat something around every feeding. Sometimes I get hungry in the middle of the night. Like shaky hungry. Even hangry. Like the kind where if you don't eat something right now you might forget your own name or pass out or chew somebody's head off or burst into tears if the waitress doesn't bring some friggin bread to the table when she hasn't even taken your order yet and you were ready to eat dinner about an hour ago and both your daughters are crying and why do we even go to restaurants with our two kids ever.

So, yes, I'm hungry. Yes, I would love a snack, or if you don't mind I'm just going to rudely eat this granola bar / apple / my toddler's raisins that I keep in my purse since I just nursed my baby and I thought we'd be home by now.  Yes, I did just eat three hours ago.

And yes, it's a big deal if I go too long without eating something.  Ask my husband about every unreasonable/irrational argument I've tried to have with him. Aside from pride and stubbornness, you can pretty much trace it all back to breastfeeding hunger.  Oh how many times conflict could have been avoided in our house if I would have just said the words "I need to eat something" before anything else came out of my mouth.

My consciously positive body image right now is fueled by the fact that breastfeeding is important to me and I know my body is working hard to make sustenance for my little nursling.

So I eat something and I don't diet.  Because I'm hungry.