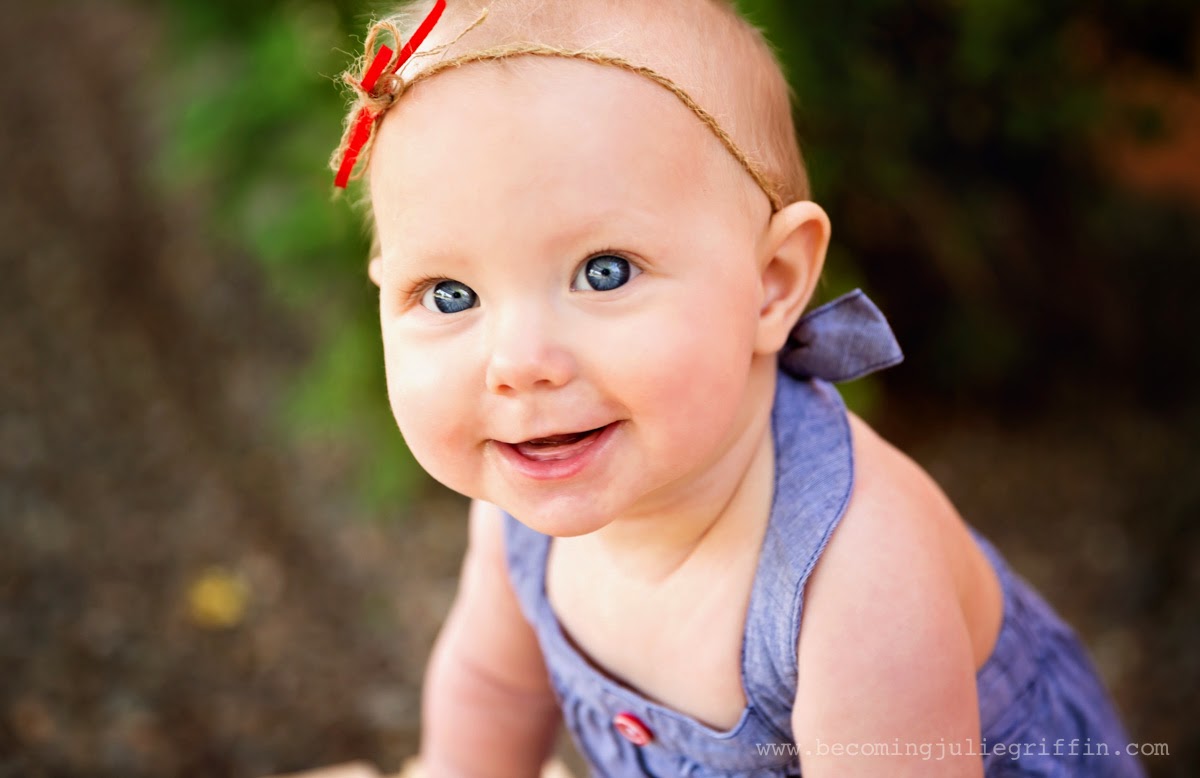 93rd percentile for height, 43rdth for weight (16 pounds at six months).  I think her cheeks and thighs are chubbier in proportion to the rest of her body than they were last time I wrote about her appearance.  I also feel like her eyes have gotten brighter and wider in appearance since she's been exploring so much.

Her hair is slightly longer but still sticking up all fuzzy like.  Her skin is still creamy and soft but susceptible to blotchiness when anything irritates it, such as perfume or sneezes. 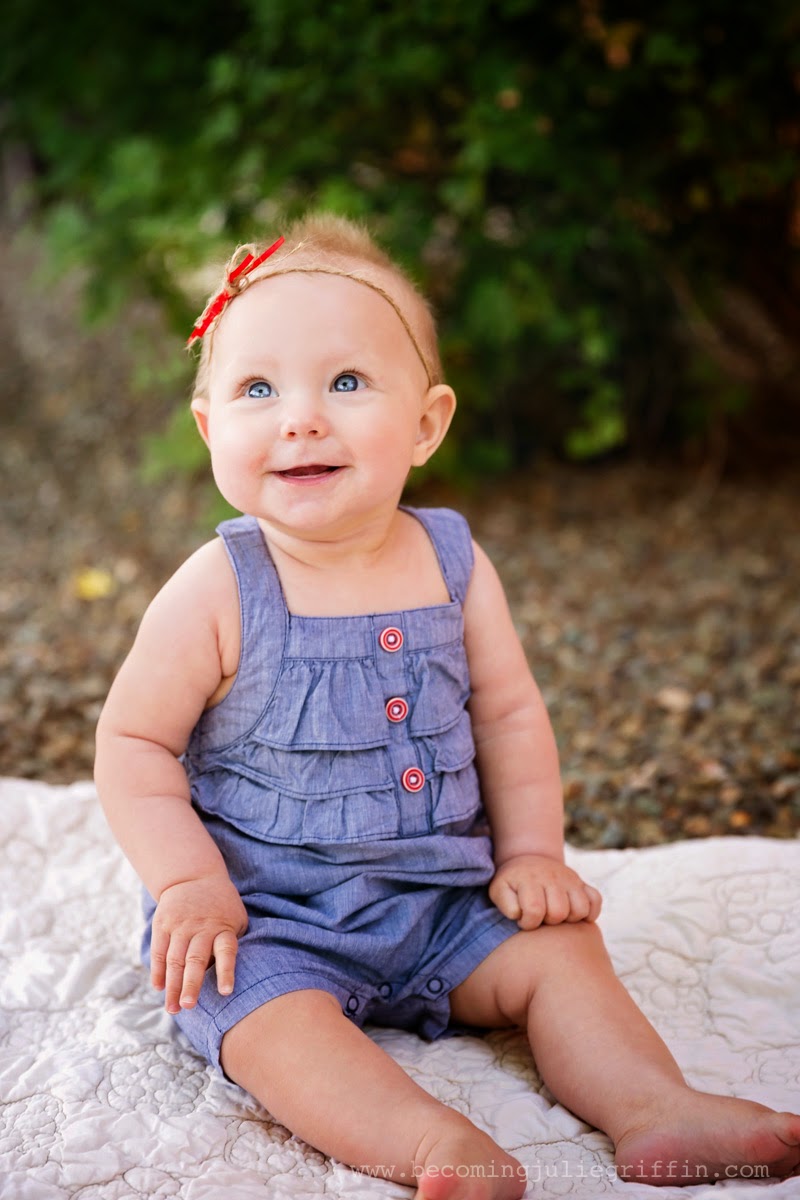 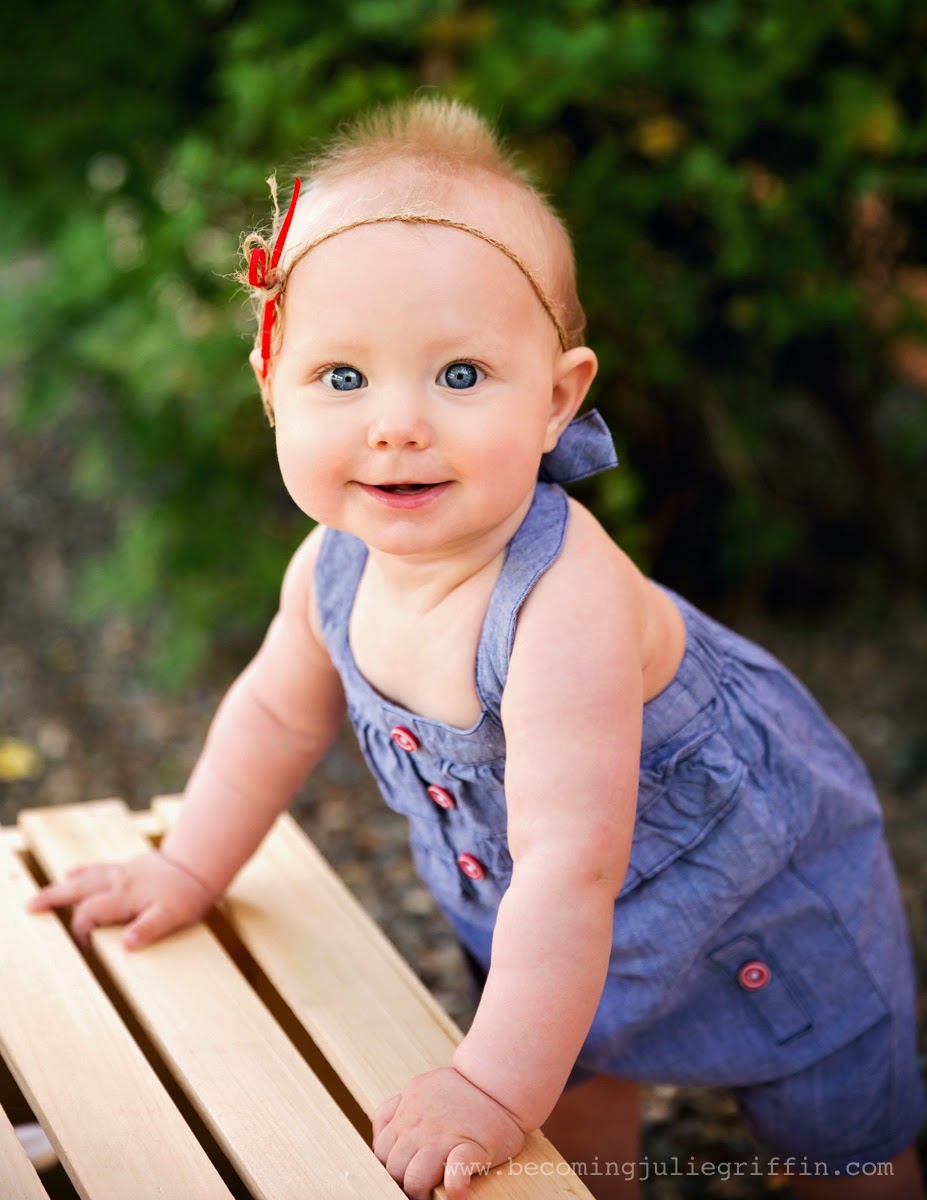 She legit crawled at about 5.5 months, and pulled herself up to a stand three days after she turned 6 months.   Needless to say, now at seven months, she's all over the place.  And she's fast.  She's also already cruising the coffee table, usually in pursuit of something she's not supposed to have, such as a coloring pencil or sippy cup that big sister left there.  We didn't really have to baby proof our house with Penelope -- this will not be the case with Josephine.

She's much more interested in going places than making eye contact and sing-songing it with Mommy - very different from her sister at this age (if my memory doesn't fail me).  Diaper changes and getting dressed are a struggle.  This kid would take on a whole household of furniture buck naked if I let her.

Favorite things right now are going in/out/through/peekaboo in this tunnel, the dogs (climbing them, crawling "chasing" them, laughing at them do things, and eating their toys), going under tables and finding things other people dropped, trying to unplug things from electrical outlets, eating shoes, and bath time.  She spends a lot of time on the floor with pretty decent amount of freedom to explore.  She does not like to be confined to the play-pen (a.k.a. pack-n-play) in my office, so all of you who were like "oh you can still get work done with a six-month-old, just put her in the pack-n-play with some toys" can eat your pack-n-play.

She's been doing "babababababa" and "mmmmm" and "mumumumumum" and the funniest most adorable shriek of a laugh.   I thought she was teething a couple of months ago when I wrote, but no teeth and no fussiness as of late.     Happy Kid.

We can't get away with eating anything in front of her without giving her something.  Just last week we put the Lobster at the table so that she could join us at mealtime, and she is super stoked to be a member of the family with a seat at the table, as evidenced by the excited kicking and grins at big sister across the table.   If I try to eat something discreetly, she will see me from across the room, crawl her very fastest saying "mmmmmmmm" with such urgency, letting me know I'd better not finish that without giving her a taste.  Favorite foods: bananas, sweet potato, pears in the mesh feeder, apple, celery stalk, pizza crust, toast, spaghetti noodles, and... yes I gave her a teeny tiny taste of vanilla ice cream once and she loved that the most.

We're breastfeeding about every four/five hours now, and once or twice in the middle of the night.  She's a real busy and distractible nursling.  If she's not tremendously hungry, she is not one to linger at the boob, and she doesn't turn to me to nurse-for-comfort much.  But I think she's stick with the EBF thing for a long time like her sister did.

Yeah.... still co-sleeping.  Best intentions of sleep training and putting her in her own room so Dan and I can have our life back, but the nursery, well, it needs about five hours of time that I just don't have.   Hand-me-downs are awesome, and also incredibly overwhelming to keep up with when you have two littles.  And I refuse to just put them back away where they were without organizing them for the next wave -- so they're all over the room right now.

I still [sort of] love sleeping with her (part too lazy to get out of bed to breastfeed, part still wanting to snuggle a tiny baby) but it's definitely taking a toll on the quality of my/our sleep.  She's become quite the animated sleeper, and she likes her space.  She grunts and kicks and makes all kinds of impolite gestures in the middle of the night that are completely opposite her daytime sweet demeanor.  Dare I say, she's a little annoying waking up all the time with the whining and the yelling.

It's time.  The kid needs to move to her crib.  Hopefully by the next time I write on this topic, she'll be sleeping through the night in her own bedroom.

Insert same nap bit as last time I wrote about Josie: [I can pretty much count on her to take two long naps throughout the day, one in the morning about 2 hours after she wakes up, and one in the afternoon, which I can sometimes finagle to be at the same time as big sister's nap.    If she's slept long enough, she wakes up incredibly happy and singing.]

Not much exciting going on here.   I am enjoying the peace-of-mind that comes with having a robust baby on-the-move who is not as tiny and delicate as before (like being able to put both girls in the bathtub with no props or extreme slipping paranoia is about the greatest thing since the pacifier.)   I still get my newborn fix with a steady flow of photography clients, which I luuuuuvvvvvvv.

I cherish sitting back and watching a sister relationship grow between Josie and Penny as they're starting to do things that resemble the very beginnings of playing together.

I'm perpetually tired exhausted, but it's all worth it.  I can sleep when I'm old.