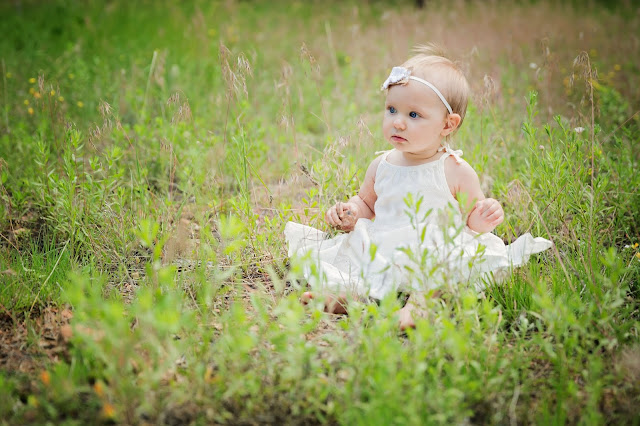 She's still a little chunk, but thinning out slightly as she's become so incredibly active.  Since the rest of her body is starting to resemble an "older" baby (and much less like a newborn or infant), her chubby cheeks really stick out like jowls.   You can definitely tell that she's breastfed.   She's cut four teeth but only two are actually visible, the bottom middles.   Her hair has really grown and it's less like fuzz now.  She has a "mustache" in the back, a natural part at the middle of her neck and the hair growing sideways toward her ears.

She's wearing size 12m-18m.  Still doesn't wear shoes, although I've been meaning to dig into my hand-me-downs because I think this is about the age that I started putting shoes on Penelope from time to time.

Her face is very sweet, matching her easy-going disposition.  She'll go to most anyone and is starting to play coy by pressing one cheek to her shoulder and batting her eyes at the lucky onlooker.  Her eye-lashes sure have filled out since she was born without them. 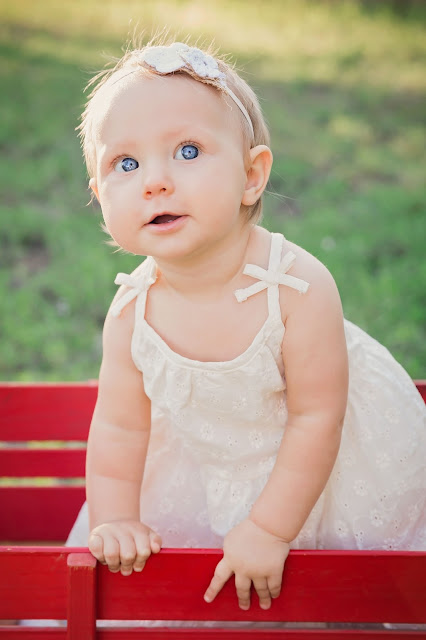 Crawls fast, almost always with her one foot and one knee.   She can climb the whole staircase from the basement, and can climb completely into the dishwasher.  She can almost climb up onto the couch by pushing one of Penny's stools over to it.

A couple weeks ago, up here at the cabin, she starting standing on her own from a squat, without holding onto anything.   I'm super anxious for her to walk because that will mean no more filthy knees and hands, but no first steps yet.

Sometimes I get excited because she will crawl over to me and raise her arms up to be held and I think it's because she wants to be held and be snuggled, but really she just wanted to be lifted up so she can have a better vantage point of what's going on in the room.  She'll look around, figure out where she wants to go, then press away from me to be put back down in the direction of choice.

Patting the table / playing drums is a fun game for her.  It's really funny when she tries to go fast, like she surprises herself with the sounds she makes.   She's also catching on to peek-a-boo and patty-cake.

Noises: she squeaks and squeals more than any other noise, almost sounds like a cockateel when she's happy.  She learned how to clap/applaud at our friends Jon and Emily's wedding, which was very fitting.  When she babbles, it usually comes out "bahbahbahbah?"

Just like Penny, Josie plays by herself really well, although she gets into a lot more mischief/danger than Penny ever did.  You can put her in a room with ton of cool toys and she'd most prefer to go find an electrical outlet to try to stick her finger in, or a dead bug to attempt to put in her mouth, so you really gotta watch this one. 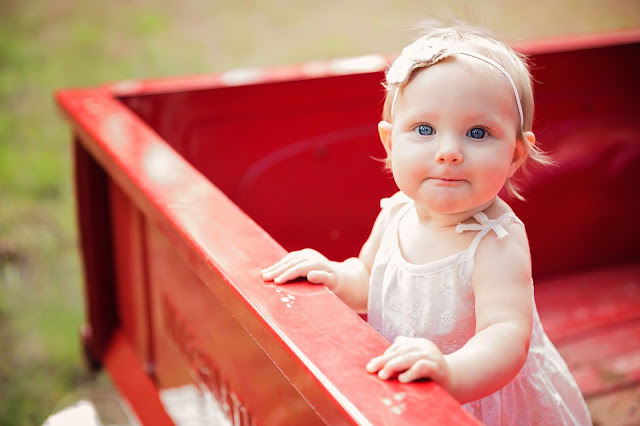 The kid is OBSESSED with cups of liquid.  She gets SOOOO excited when there's a cup with a straw within her reach.  We say she has a "drinking problem" because when she drinks water, she happily spits about half of it out as she goes, drenching herself and anyone who might be holding her.

She's basically tried everything, aside from the off-limits things like raw meat and honey.   Any given day, there's a good chance she eats: one or two pouches, some greek yogurt or cottage cheese, half a banana, some torn up meat, cheerios or other finger-food cereal, and sliced up strawberries or whatever other soft-fruit we have in the house.

We moved her to her crib right after Dan got home from his last bachelor party.  We had two very tough nights doing Ferber method, but pretty smooth sailing after that in terms of bedtime routine.  Sleeping through the night is another story -- still waiting for that to happen.  I can't seem to kick the middle-of-the-night feeding(s), and she still wakes up around 5am to come into bed with us and nurse and (usually) fall back asleep for another two hours or so.
She's napping about twice a day, usually a short one in the morning and a decent one in the afternoon.  Not on a schedule though, to my advantage most days.

Dan and I recently got Apple Watches, so that's kind of the new gadget in my life.  In the photography world, I recently got my LLC, business bank accounts, and have been working on a more strategic business plan launching in the Fall so that I can start to pay myself a [small] salary next year.  I've been working 30-35 hours a week so I figured actually paying myself some profit is in order by now.  So that's kind of exciting.

Today marks the last full day of our first-annual summer trip to my parents' cabin, we've been here for 17 days and it's been wonderful.  Me and the girls have been here the whole time and Dan has come up all three weekends.  I've gone as hippie as I probably ever will, not plucking my eyebrows once or even wearing deodorant most days.  Re-entry into the hot valley of the sun is going to be tough tomorrow.

The poor sleep patterns are wearing on me a little bit (per my ramblings a few posts back), but I keep telling myself that some day, she will sleep through the night.   And enjoying her during the day makes up for it.