Surrender and The End of an Era 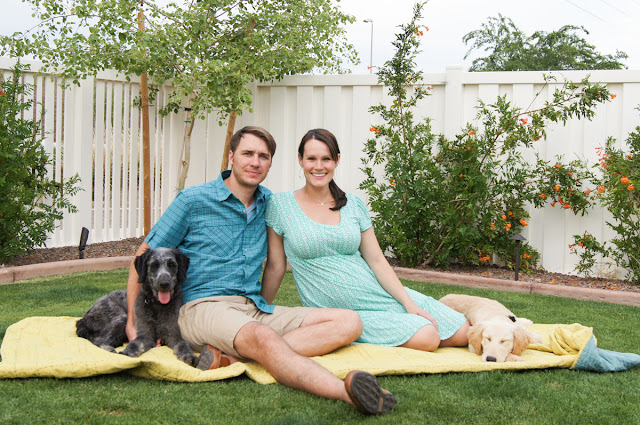 Dog ownership has numerous benefits.  For the kids: responsibility, compassion, companionship.  For the adults: the rewards of training them (successfully), a creature that loves you unconditionally and is always happy to see you, the oxytocin from petting them, never having to clean up food off the floor, I could go on and on.  The whole 'man's best friend' thing is pretty scientific.  Dogs are awesome.

Being a "dog family" has always been important to me, and Dan got on board with adding two pups to the household before the children were born, only with the guarantee that they'd be a breed big enough to keep up with him when he went running with them.   So, we got our golden retriever mix pups, Luna and Apollo, when I was pregnant with our first child just over four years ago.  We adored them immediately.  We nurtured them, trained them, took them with us wherever we could, shared lots of photos of them, kept up their vet records and grooming.  We did all the things, and we loved it.

Anyone who knows us personally has probably spent time with Luna and Apollo over the last four years, and most of you would probably say that they are some of the best dogs you have ever met.   They are gentle with children, tolerant, smart, obedient, sweet, loyal, friendly... really wonderful creatures.  I might go so far to say as they're the best dogs in the whole wide world.

Anyone who knows us really really really well also knows that over the last year ish, mainly after our second child was born, dog ownership has been a stress on our family life, and a wedge in our marriage.  And that's why I'm writing this post.

There came a time, I couldn't pinpoint exactly when, that caring for our dogs and caring for them well became more than we could handle.  They weren't getting walked, or even played with.  We opted not to bring them with us to places we would have totally brought them before we had kids, because we needed to put the stroller in the back of the car, or it was just too much to think about.  We still fed them of course and gave them water and picked up their poop, and they were still part of our home life, but it wasn't the same.   The guilt... oh the guilt...  of course Luna and Apollo never complained, they were happy in their indoor laziness and free reign of the not-so-groomed backyard.   They loyally followed me and the girls around the house when we were home, and loyally waited for us to come home after we left for a while.  But it wasn't ideal for anyone.

As it goes with any animal, when we eased up on their training and attention, they got bored and restless.  A few months ago, Apollo discovered that he could climb over our five-foot plastic fence and explore the neighborhood whenever he wanted -- and so there went their outdoor freedom.  Luna began to gain a little weight from eating the table scraps from not one, but two messy toddlers.   While they never destroyed anything of great consequence (I've heard horror stories of couches being ripped apart or expensive shoes being eaten, etc.), the various sporadic incidences of vomit by the back door, or paper-shredding when we left for a few hours, were so much more a burden than they would have been if I wasn't already cleaning up after my human children all day long.  Then there was anxiety about leaving for too long, worried about how long since they'd been out -- not just what they might do while unsupervised, but the guilt of being away.

It was being overwhelmed with everything going on in our world, with two children and the rest of life; and also having the dogs on top of that.   It was cursing any forecast of rain because that meant the backyard would be muddy and the dogs would track it inside and it would be one more thing to clean.  It was trying to find a dog-sitter to stay at our house any time we wanted to leave for the weekend.  It was trying to remember when they needed another vaccine and vet checkup and to renew their license, and missing the deadline every single time.  Everything about them was just One  More Thing.   Dan checked-out and stopped caring, and I just wasn't good at any of it anymore.  We both got resentful.   I cringe as I write this, that the dogs were such a burden, because they are SUCH great dogs... but that was our reality.

That sort of failure was a daily feeling for us.  Our wonderful dogs were getting the short end of the stick and it was all our fault.  You see, people shouldn't get a dog unless they are committed to making that dog a priority in their family's lifestyle through all the stages and seasons that will come for the remainder of that dog's life-expectancy.  We always planned to have kids, but we had nooooo idea how much we were going to suck as dog owners after we had human children.

Turns out dog ownership isn't for us.  Gosh that's hard to say.   Dan and I didn't communicate our feelings about the dogs in a healthy way for over a year, and it has taken a lot of really hard conversations and a lot of tears jammed into a short amount of time for us to get to a healthy place about this.

I haven't stopped crying in two weeks since we made the terribly difficult decision to re-home Luna and Apollo.

Making the decision to give them up, but not knowing where they would be going or when, yet still having them in our house with us going about their good-dog day-to-day, was simply awful.

Once we made the decision, there was a lot of legwork to do to get them to the right place.
Let me tell you a few things I learned in the process:
1. Craigslist has banned the sale/exchange of pets.  Not a good option for re-homing beloved animals.
2. Humane Society?  Not so humane.  Animals surrendered by their owners are almost always euthanized, sometimes that same day.  Not an option.
3.  There are "shelters"and there are "rescues", and they all operate a little differently and you have to ask a lot of questions before making a choice, especially if you want the "best thing" for the animal you are trying to re-home.  The local shelters and rescues that came up in my web searches were not candidates for these two top-notch amazing pets, and there was definitely no chance that they would get to stay together.  They simply didn't belong there.

We first reached out to family and friends, with hopes that someone might know someone who would A. want two adult dogs, and B. be the perfect home for them with a giant yard and no other animals and older kids and a real heart for dogs that would triumph over the difficult seasons in ways ours did not.  This is a big thing to ask of your acquaintances.  Even of the friends and friends-of-friends who were interested, there were no perfect candidates that we could have given them away to without some reservations.  I was feeling desperate.

Lucky for us, Apollo and Luna are 75% Golden Retriever.  A few days after I sent that first blast email to every dog lover I know, I had two trusted contacts recommend an organization called AZ Golden Rescue that operates literally like an adoption agency for Golden Retrievers.  They have a waiting list of over 100 families that want to adopt, each of which has been interviewed and their homes inspected before being approved to get a dog from this organization.   Luna and Apollo were perfect candidates due to their training and demeanor and health, and the woman I spoke with over the phone was very enthusiastic that they would be placed, together, quickly and with an amazing family.  I felt so much better about our decision after this phone call, and knew it was the right way to go.

Two days later I got the call that they would be picked up Sunday morning and taken directly to their new family.  I felt despair that their leaving was final, yet so thankful for this organization, for the anonymity, and for the peace of mind that they are going to be adored and cared for so much better somewhere else.  Sadly most dogs who are surrendered by their owners are not so lucky, suffering fates I would have not been willing to impose on our dogs.

I wrote a six-page document for their new family describing each dog's personality and tendencies and favorite things; their routine and what they're used to.  Four years is a long time to have an animal, almost our whole marriage.  I know Luna and Apollo better than anyone.  I cried. A lot. And cried some more.

This morning we gathered all their things.  Brushed them one last time.  Patted their heads one last time.  Signed some papers.  Cried some more with the volunteer who picked them up (she was wonderful).  And at 10:30am we said goodbye to our dogs.

This whole thing has been so damn hard, and I expect it will be for a while until I get used to my feet being cold under my desk where Luna used to lay, and the cheerios on the floor with no one to lick them up, and coming home to an empty house with no one to greet me.  They're really gone.

I've reflected on Luna and Apollo's service-animal heritage and what a service they did for Dan and I.  Early in our marriage, training them was a bonding experience that prepared us for parenting in more ways than we knew.  They provided countless hours of fun and companionship.  They have been good, good dogs.  Truthfully better to us than we were to them in the end.

Now they will bring new joy to another household.  I don't know specifics, but the volunteer told me that their new family has a giant house and a giant yard, and middle-school aged kids to play with them all the time, and a hiking trail right up the street.   I know they will adjust quickly and will live a long and happy rest of their dog lives together.

And we, the Griffins, are not a "dog family".  And never will be again.  And I've had to let go of that.


Think you want to get a dog?  Think twice.  Think three times.  Think a lot.  Don't let our story dissuade you from dog ownership, but please consider the very real circumstances that await you and your lifestyle for the next decade or so before you make the decision to add a dog to your family.  Puppies are cute and dogs are cool, but pet ownership should be a long-term commitment.   Don't be like us, trust me you don't want to go through this.